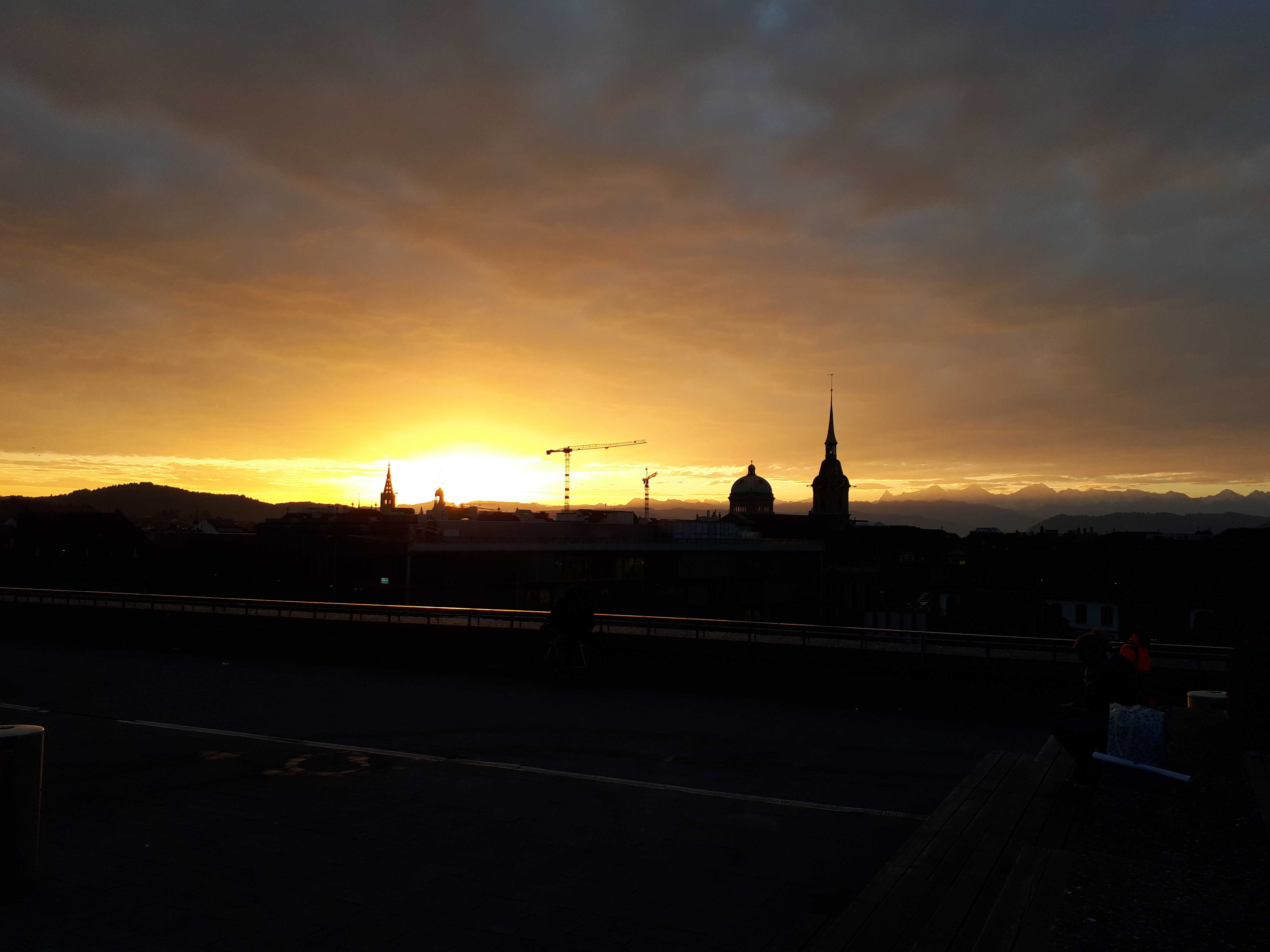 Interesting, fun, exhausting, hard and so nice. I am very happy with my choice for my studies. Sports Science and Biology are definitely one very good option of plenty of possibilities you have at the university of Bern! Although I haven't been that at university that much because of JEC and trainingcamp, I've got a pretty good impression of what the course of studies is all about. There's about half of the lectures hands-on what means that I swim on Mondays, do gymnastics on Tuesdays, play floorball, football, basketball and other games on Wednesday and finally, Thursday is fitness-day. As you can see, there's pretty much variety.

But as said before, after the first 10days at university I already left for JEC and a trainingcamp with the junior national team in Austria. 1.5 weeks filled with orienteering in terrains which are a bit different terrain from home. But also the difference between the forest at JEC and the forests we visited during the trainingcamp was huge. While the terrains in Fürstenfeld (JEC) were quite flat with only few details, the terrain around Raach im Hochgebirge (near Wiener Neustadt) was much more detailed (which I definitely like more).

Starting with relay was a bit special as this event is actually always the last of all competitions. But whatever, we had to be prepared. I was really looking forward to my race, the old map looked nice with some deep ditches and also flatter parts. For my team Anja Probst run the first leg and Katrin Müller the second. I was lucky enough to get the third. I could leave the arena in 6th position and managed to catch up with most of them pretty early. After about half of the course I saw Valérie who was running for the other Swiss Team and later I met also the Norwegian girl. She made a big mistake in the end and the first two places were taken by the Swiss Team! A nice beginning of the weekend. Throughout the whole race my feeling was very good and I only lost it in the end when I remembered the wrong control number which made me a bit confused for a short time.

I don’t know why, but I couldn’t really focus on long distance on Saturday. When I stood in front of my map I was indeed ready to start my race but not nervous at all (which actually never happened to me before at an international competition). However, I was looking forward to running in such a special and nice forest. The race then was real fun and I enjoyed it from the beginning (even though the not-being-focused leaded to too many stupid mistakes). Mostly on the last loop after the run-through, I wasn’t really able to read the map carefully and like this was “fishing” a bit in the control centre (as the Austrians use to say).

Finally, the Sprint in the early Sunday morning. It was definitely not my favourite race that weekend as it was quite an easy sprint without any technical parts except the end. And the two hours earlier starting time because of a celebration in Fürstenfeld didn’t make it any better to be honest. To get an idea of what I mean: Eating latest three hours before my starting time (8:30) means “breakfast” 5 o’clock in the morning. So I put my alarm to 5. But guess what, I just continued to sleep and put it to snooze mode. Means that I couldn’t really eat that much before the race… The competition then got quite hard like that but I still managed to find all the controls quite well. The only part where I lost a lot of time was the last (and practically only) route choice where I just didn’t see the best route (even though I had actually looked at pretty much the same route in my preparations…). But hey yeah, the epic training camp was waiting for us!!!

Almost directly after the sprint, we drove back towards Wiener Neustadt, where we stayed somewhere in nowhere between some nice hills in a one-horse town (named Raach im Hochgebirge). With lots of great trainings in great forests and two sprints in special urban terrain, we enjoyed our week in Austria and learned definitely a lot!

Back in Switzerland fall had proceeded and the leaves have got coloured in red and yellow. I really like this time of the year, especially to do some long runs. But, well, there was still university going on and I am still happy with my choice. It depends a bit on the program we have in our sports lessons, but mostly it doesn’t really change my training and I can train as I was used to before university.

There are also tons of regional competitions during fall time and I did my first night-o of this season. Even though I don’t really like those, I kind of had my fun out in the dark forests. Another event to mention is of course the Rigi-Weekend one week ago with two national competitions and the first snow to feel. Unfortunately mostly downhill but the terrains were great! The first forest sprint since a long time was real fun as there were many big rocks and it was like a maze to run through. It was not my best ever performance as I made some stupid mistakes (mostly running too far because of the map scale) which I think is just because I ran too fast and didn’t take the time I needed to see where to stop. It was then far better on Sunday at long distance. The weather played up, rarely the sun was shining, it snowed like hell for a short time and it was quite cold… Luckily my start was early enough to avoid the snow storm and I really enjoyed the race! I felt like I couldn’t stop running in that technically demanding and very beautiful terrain. 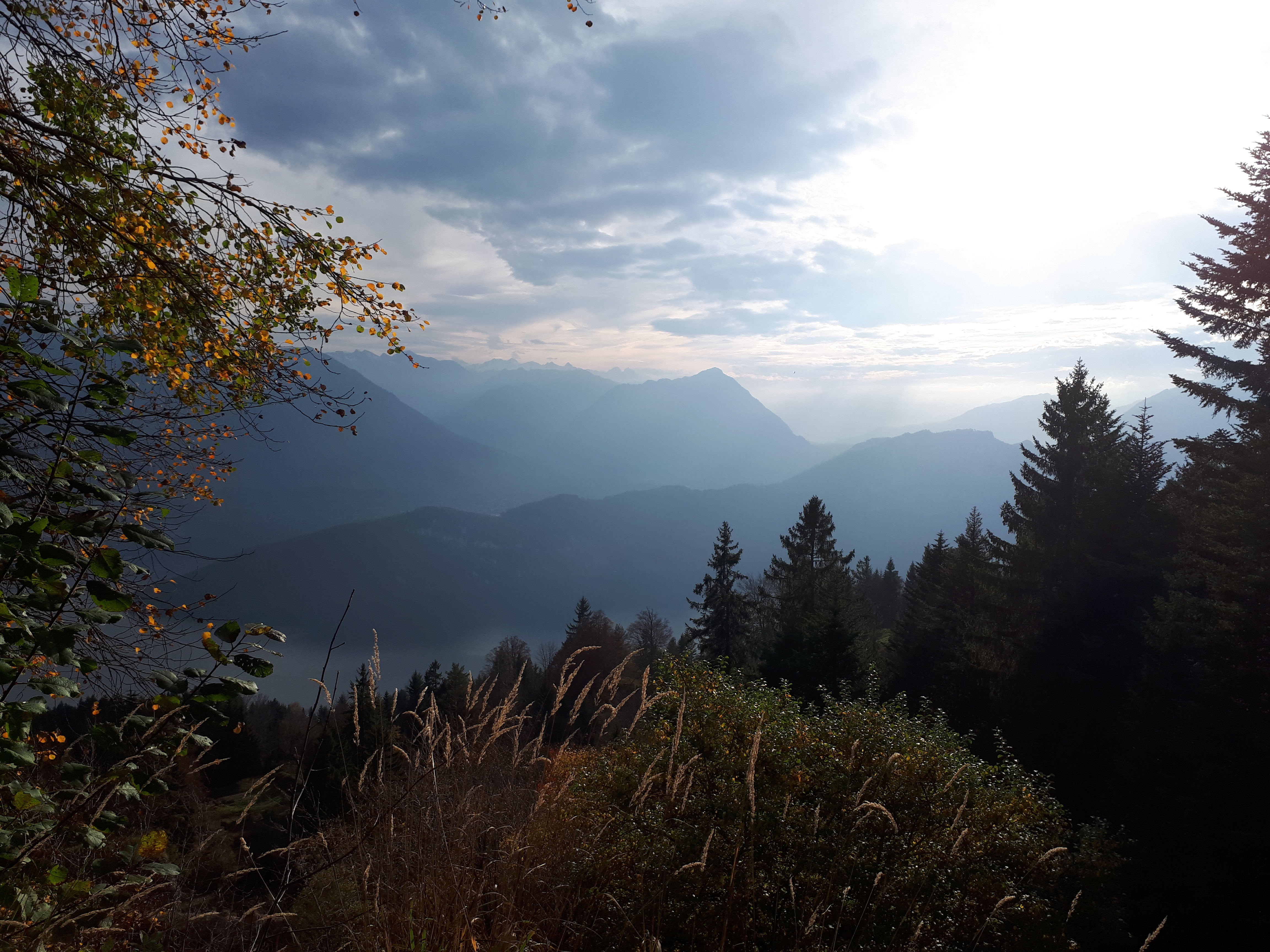 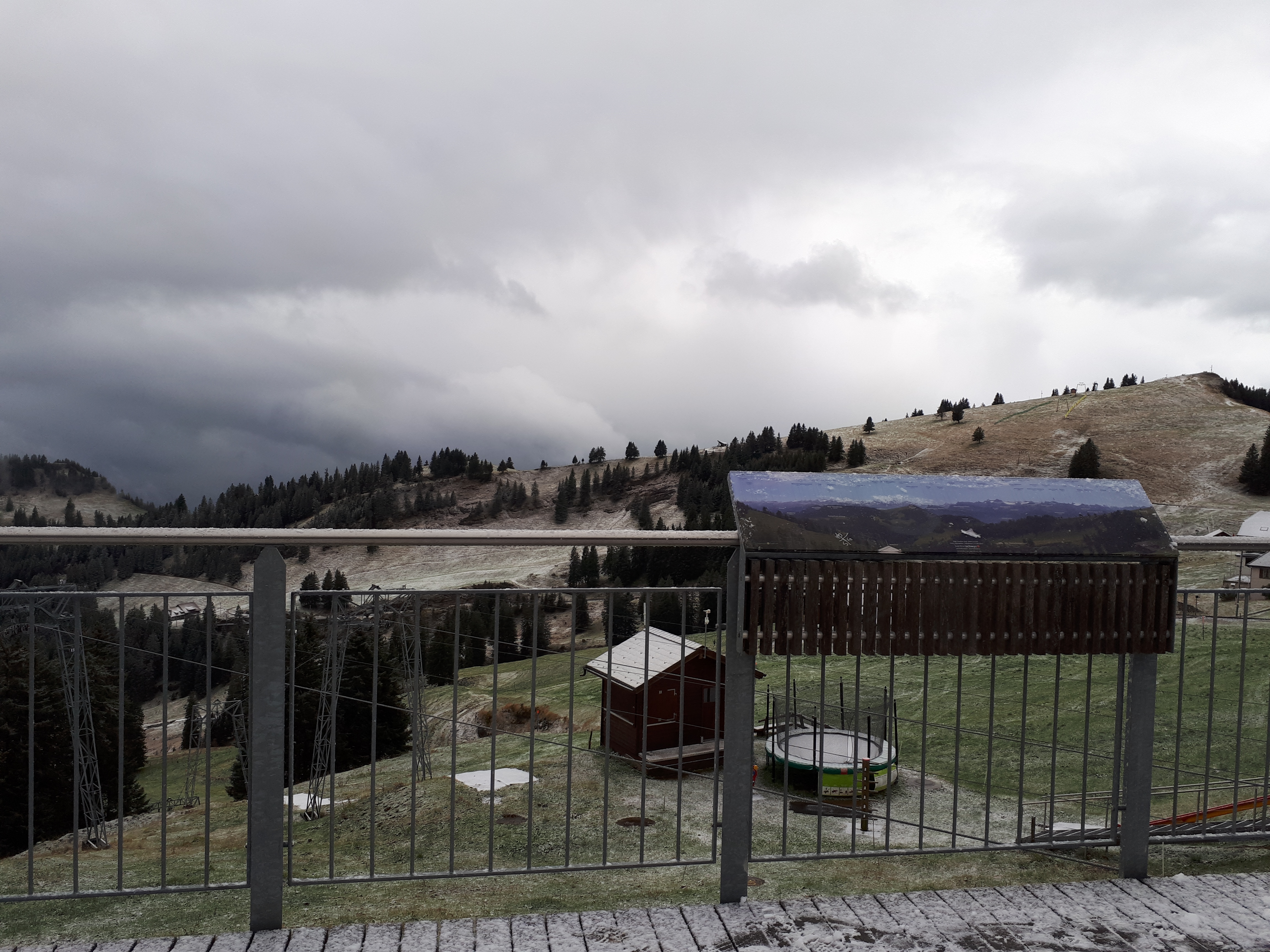 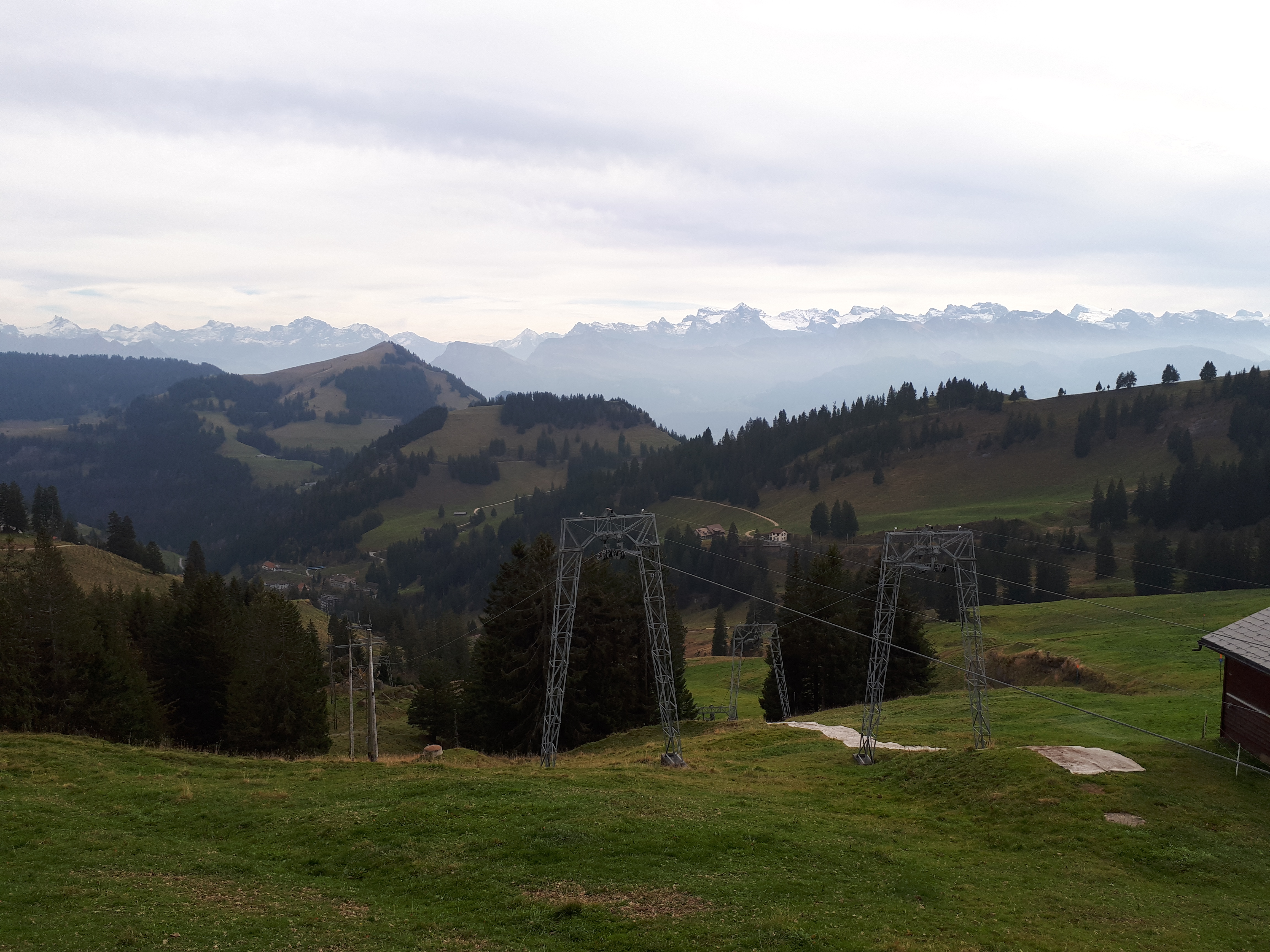 The regional sprint yesterday in Sutz was another great training. With lots of artificial fences the courses were very demanding and just so much fun! Sad for everyone who missed it. I think the same counts also for todays team orienteering competition which I ran with Joana and Jael Wälti. Even though there were, in our opinion, too many checkpoints in the forest (where the whole team had to be together, otherwise you were free to split) which had the consequence that you couldn’t really separate and everyone had pretty much to run the whole course except some controls. But I think all three of us enjoyed the race in a beautiful red and yellow-coloured forest, the tree we got as a price will maybe remind us of today in a couple of years.

The year is getting to an end. There are still the Swiss Champs Team-O next weekend and in two weeks the last race of this season: Swiss Orienteering Grand Slam Final!! I am very much looking forward to this event as it sounds like fuuun! The massstart together with the elite runners will be interesting and you can even follow the whole thing online: https://www.facebook.com/livemotion.ch/  (Saturday, Nov. 11th at 15:05). 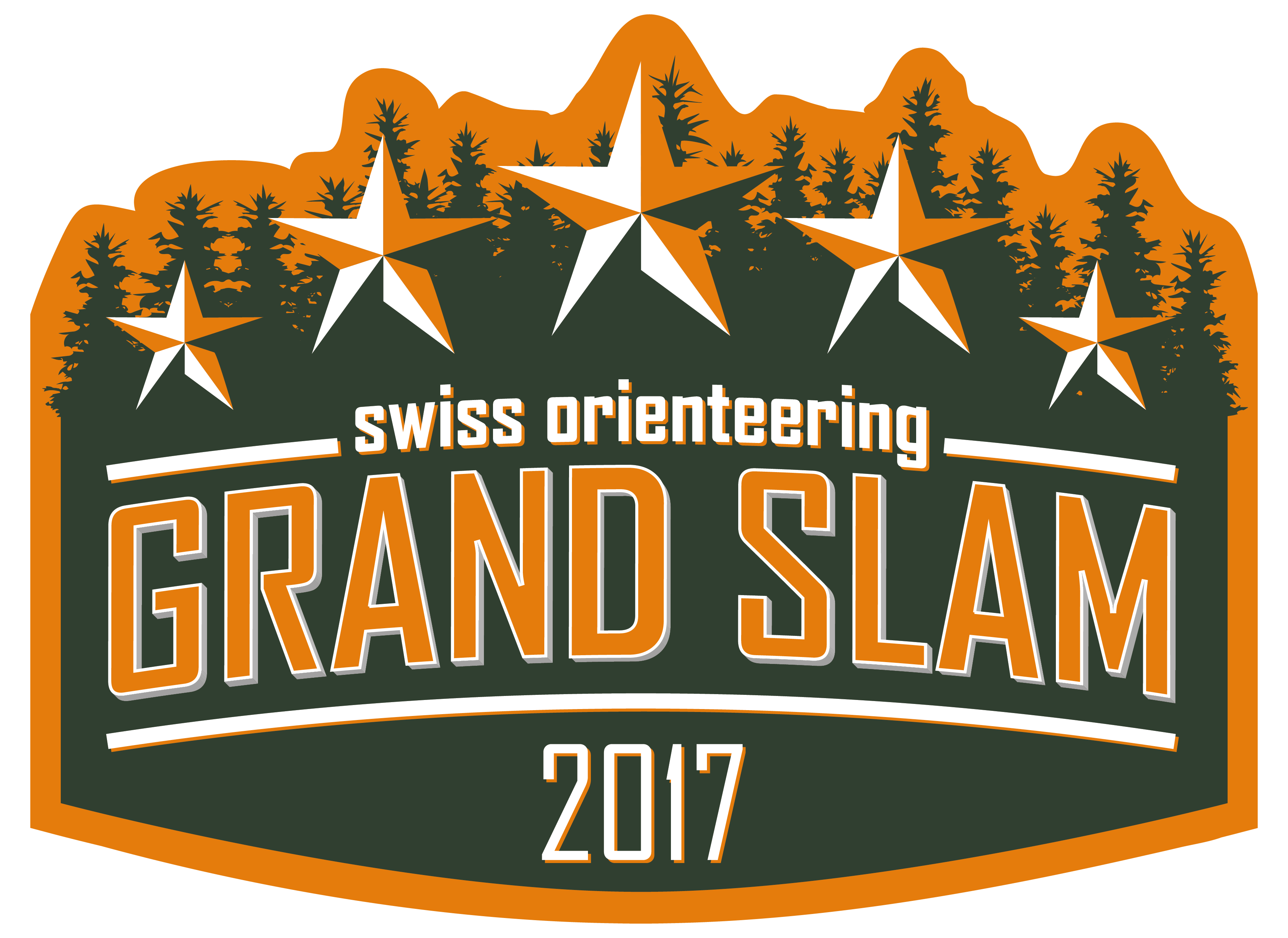