A lot has happened since I last wrote here! There were 1.5 weeks in Switzerland with a lot of events and then I am again for almost one week in Finland. But let's begin at the beginning ;)

After the e-Games in Espoo there were just 4 days left until our flight back to Switzerland. Even though the people, the terrain and everything else was very nice here, I couldn't wait to get back into 'normal' life at home for one week. The same day I arrived at home (I was there at about 1am on Saturday...), I already travelled back to Zurich for some competitions. You have to know that those were not normal competitions as everybody is used to. It was a big competition between all the regional squads in Switzerland and the goal was to find the best one. We, the legendary "Soubäre-Kader" (regional squad of Bern and Solothurn), were ready to defend our title from last year. According to the slogan of the Oktoberfest "Einer geht noch" we fought really hard until the end. As we've had a bit bad luck at the relay, we had  a little disadvantage for the individual races on Sunday. We all managed to have more or less clean races but it was still not enough for the victory. At least we definitely had the best team spirit of all the regional squads ;)

As this first weekend in Switzerland went past it still felt strange to be at home. Everyone understands what your saying, you can talk swiss-german in the shops and you are able to train with your club mates again. All that felt so far away in Finland and suddenly you are again able to swim in the river and enjoy the hot weather by eating ice cream.

After all I could help a lot at home. Be it in the basement or in the garden, everywhere was something to do and I was really happy with it. I did some bike trainings again and used the opportunity to go to Jura or to the lake of Biel. I have never been aware of Switzerland being such a nice country!

On Saturday I travelled again to eastern Switzerland. This time with my family and for some selection races for JEC (Junior European Cup) in Scotland. The shortened long distance on Saturday was at the same time a World Ranking Event and W20 and W21 had the same course. It was very nice for me to see where I am amongst all those elite-runners. In the evening I ate my first pizza since a long time, unfortunately it was way too big and I had to take the rest home ;) (and that pizza didn't survive the next morning as it was too hot in my bag.....).

The next day, there were the Swiss champs longdistance! I was really tired from the tough race on Saturday and so I hoped for a more technical course. But as it is in Swiss terrain, there is always a loooot of running... Luckily my shape was not as bad as I thought and I managed to keep up with the others. Only on the last part I lost some time, also due to a very stupid mistake (I really wanted to see the river down in the valley and didn't take the path... ;)). With the victory, I had another problem to face... How to get that heavy price back home...

Yes, and Tuesday meant again saying goodbye to Switzerland. But this time only for 1.5 weeks, as I have to come back for JEC at the end of September :) 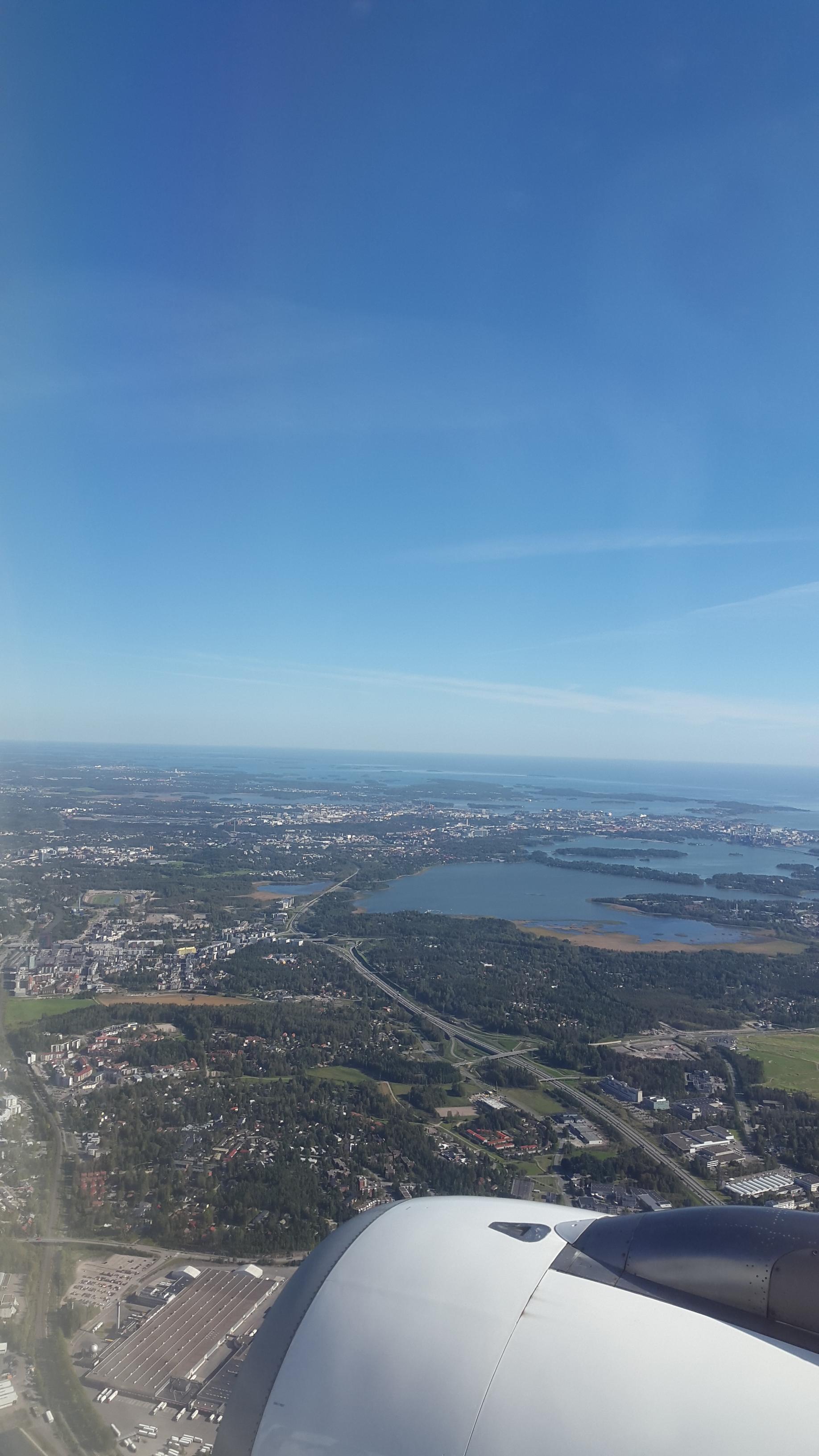 High above the city...

The first two days I spent in Helsinki, visiting the city and looking for some nice ice cream (that took me a really long time to find it, but now I know where you can find different kind of ice cream).

Some pics from Helsinki: 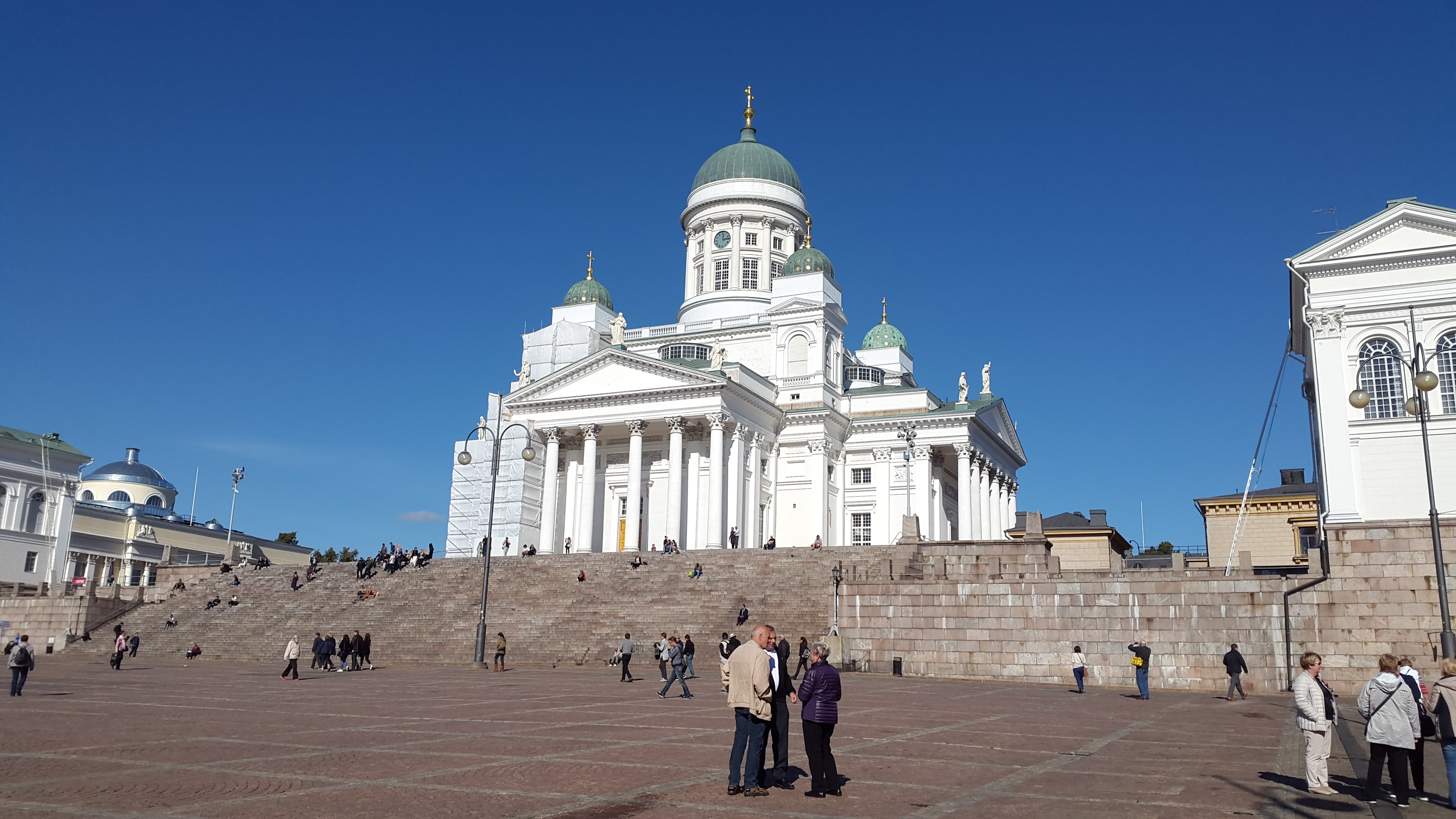 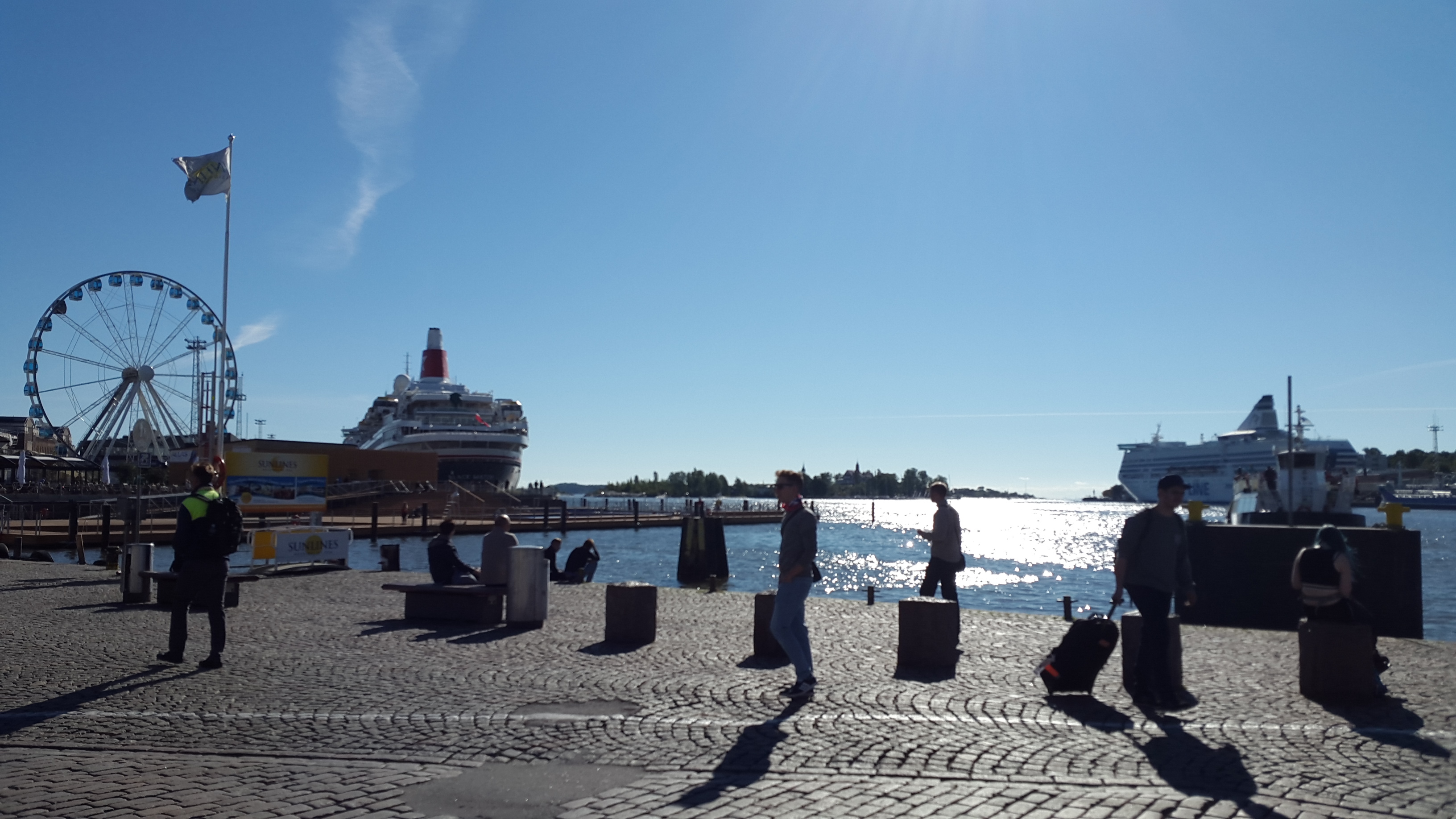 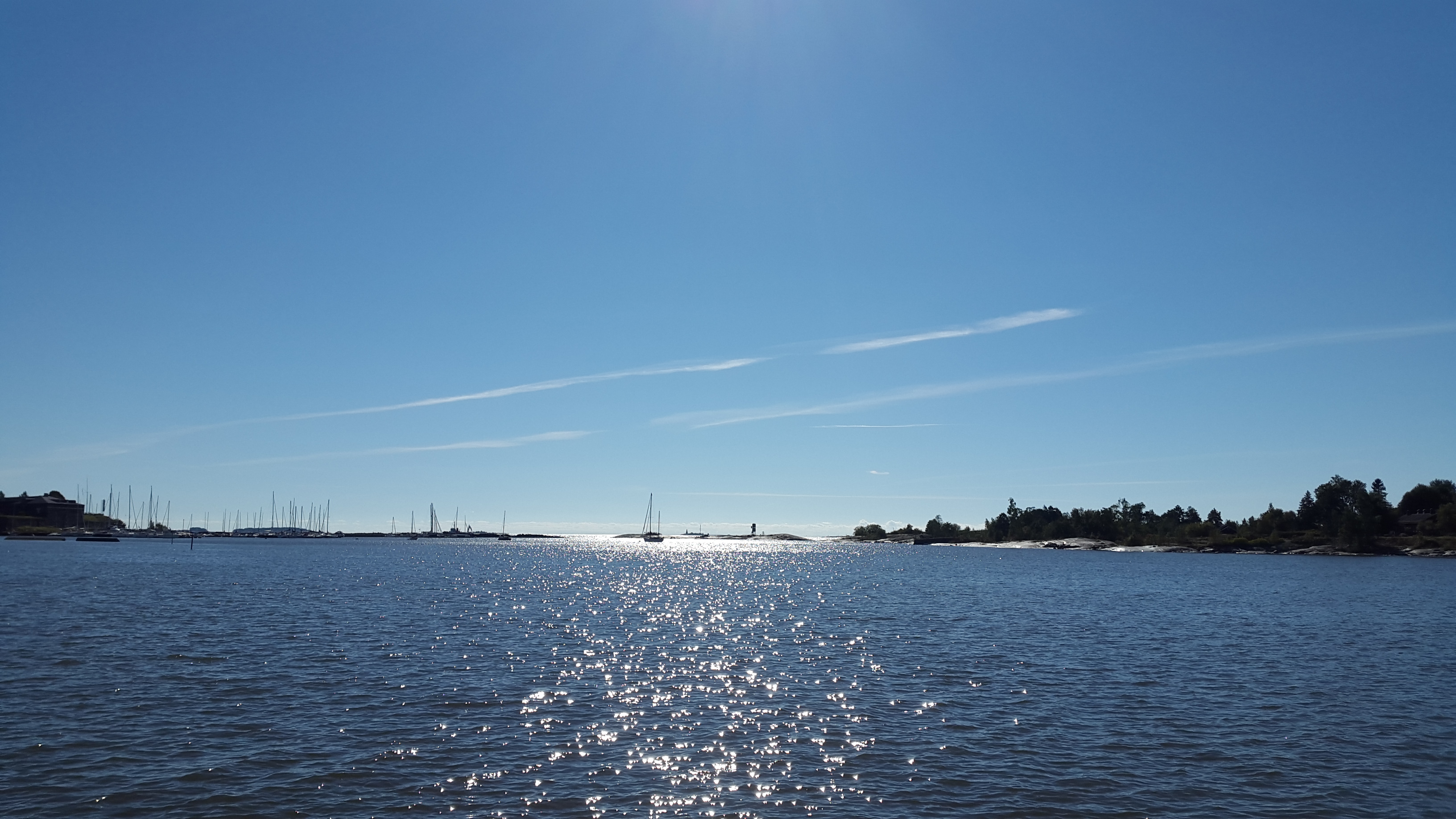 The first thing I recognized when I arrived in Tampere on Wednesday, was the beautiful colour everywhere. While I was in Switzerland, the leaves turned into red and yellow and really improved the view out of my room ;) I could't believe it was so beautiful when I went for a run on Friday, so I had to sit at the lake in the middle of the training to realize how beautiful the landscape is. Everything looks so different now and I'm happy to be here and experience that first step towards finnish winter!

As well did I join the finnish language course on Thursday, which was very nice and made me happy for the rest of the day ;)

On Friday Tuomo picked us up for the Finnish champs in Sprint and Relay this weekend in Vaasa. There was first a sprint qualification on Saturday morning and then the finals in the afternoon. As I took the chance and registered in category W21, I knew I'd had to be fast in the qualification to get a place in the A-Final. After a good start I got completely lost in the forest part and it took some time until I relocated myself and realized my mistake. I was aware of that mistake being a big one for a sprint and so I speeded up for the last part of the race. Luckily the best 20 runners of each head got a place in the A-Finals and so my 17th place was good enough. I was already happy to get the chance to run in the finals but I wanted to run better than in the morning. Although the courses were very easy compared to the sprint trainings in Tampere, I made some bad little mistakes as taking the wrong path or not seeing a fence. The rest of the race went well and I didn't know after all, if I should be happy about my performance. But then more and more runners came to the finish and I realized that my time was not that bad. On the contrary! It was very good and I was really surprised when I saw that I was 4th with only 12 seconds to the winner Merja Rantanen. I would have never expected such a result in a competition like that in the elite class!

But there was still one race left. SM-Viesti, the Finnish champs in relay on Sunday. With Salla Pitkänen on the first leg, Anni Haanpää on the second and me on the last leg, we had quite a good team ;) Unfortunately the luck wasn't on our side on the first leg, but then Anni speeded up and brought our team to the third intermediate place! On the last leg I took my time, I guess sometimes even too much... I never really got into a flow and that ended up in a mistake in the end of the course. It was a bit greener as I expected and that was the reason why I started looking for the control too early. Some circles and one time I even nearly hit the control but didn't see it. After all I managed to keep the position and so we finished 3rd. For me that is the first Finnish championship medal, a good start with a bronze one ;) 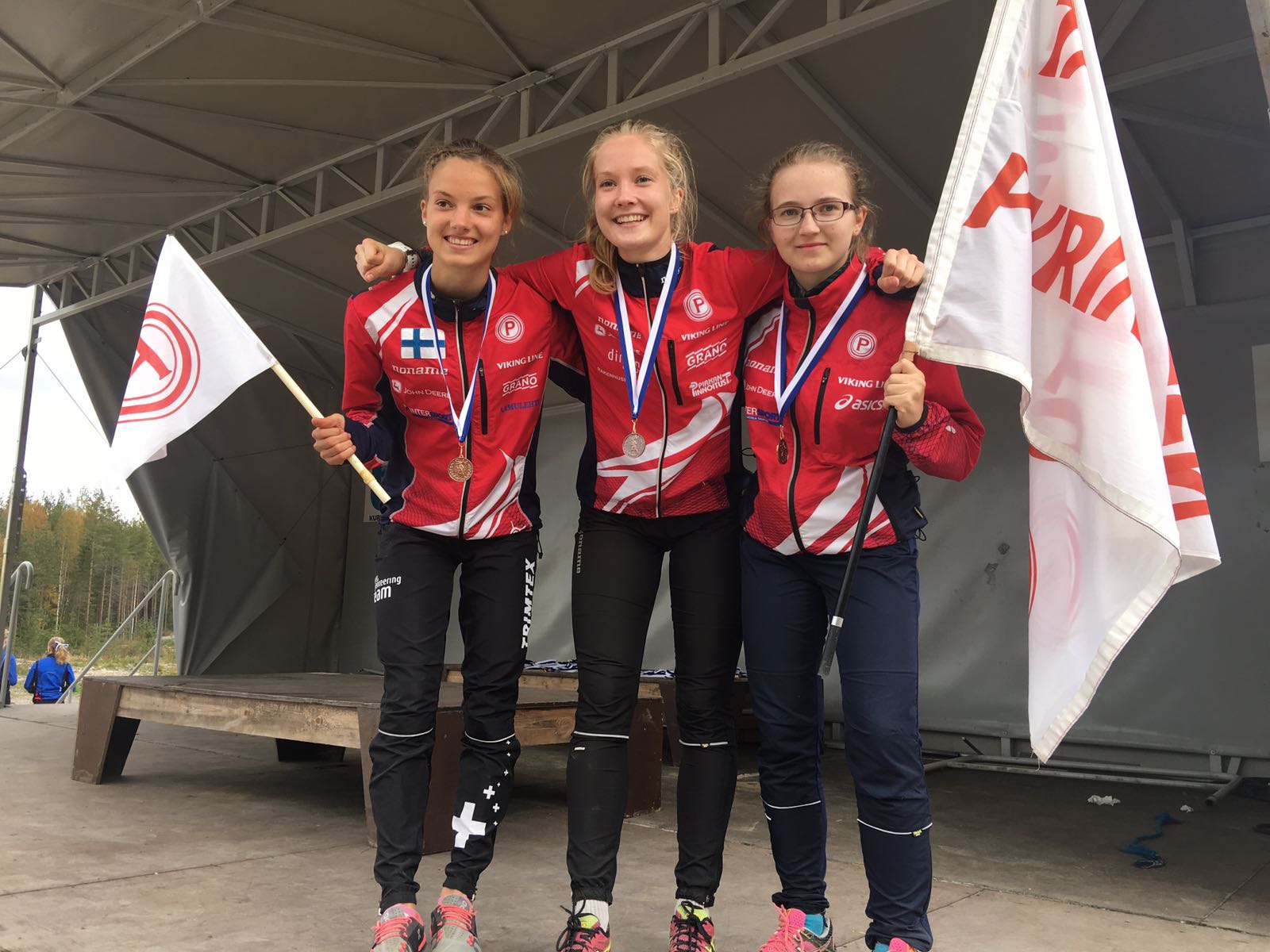 View from the hotel room in Vaasa