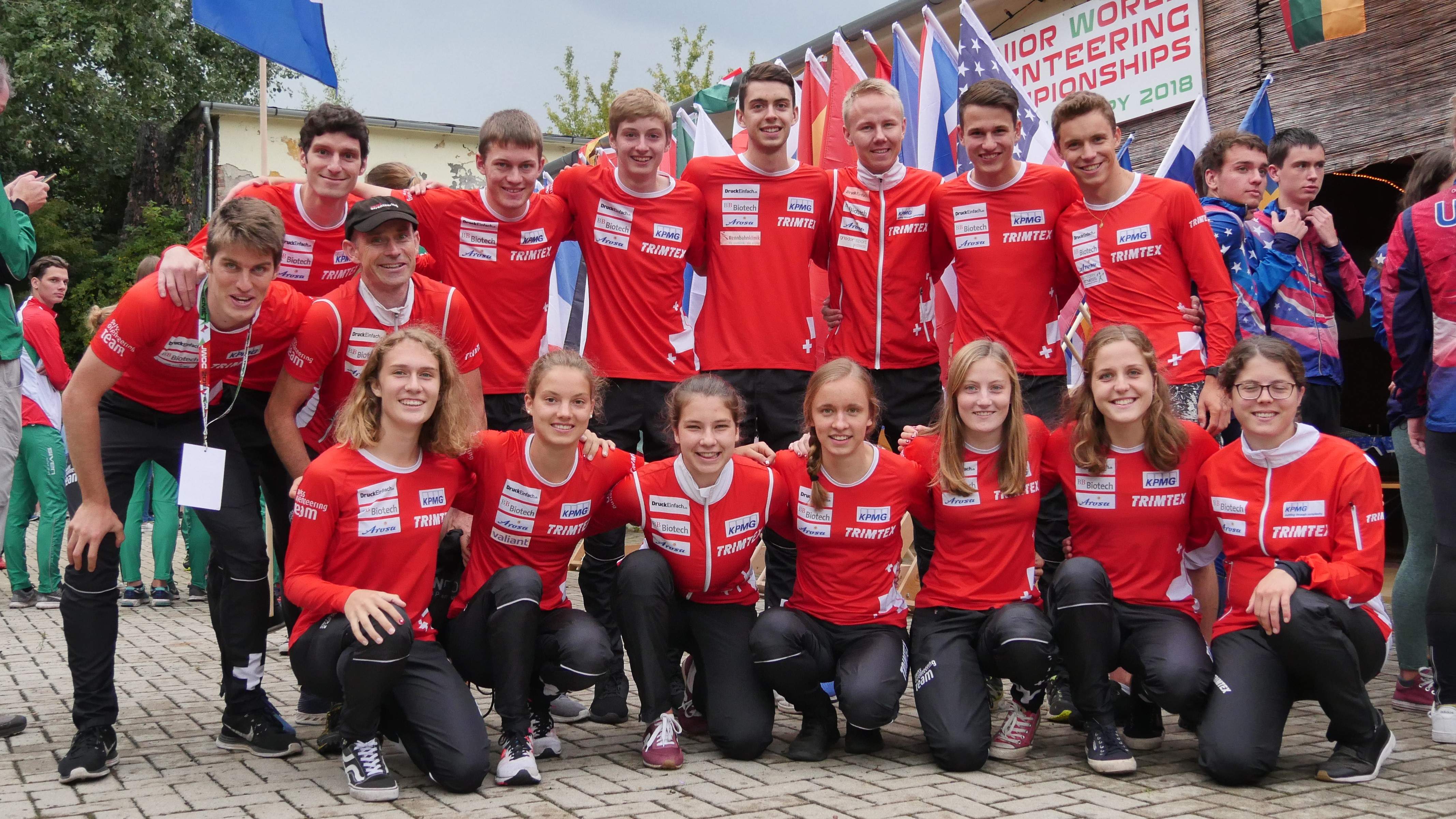 This was indeed the most special JWOC I've experienced during the last 4 years. Except for the training camp in March, I've never been to Hungary before. The terrain was very unique, especially the Middle distance with which I first had some difficulties. The accommodation was situated in the middle of a quarter of empty houses (which I'd only known from TV) and the canteen was outdoors. The transport to Middle distance qualification and final was done by military trucks and due to the sand, we had to wear mask. And when we got out of the trucks we were all covered with dust. In addition, it was already my second championship this year and as soon as I was done with university after EOC in Ticino, I had to prepare for JWOC again. It was the first time I drew a map from a Sprint terrain and the first time I was afraid of the championships. I didn't know if my shape was still good after almost five weeks cycling and deep water running due to the pain in my leg after practicing to much High-Jump for university. I didn't even know if I could run over 40min and if I could run fast at all. The competition I was the most afraid of, was for sure the Sprint because this meant running for at least 15min on hard ground. And full speed.

We arrived four days before the first competition, so there was some time to train in similar terrain. For me it was also a test and a chance to get some self confidence back. Already the first long distance relevant training went pretty well, and I could run some parts fast. When I looked at my watch afterwards, I was actually quite surprised how fast it really was. Maybe a bit too fast, because it was almost the calculated long-distance competition speed. But it gave me the answer I had been waiting for, for such a long time. I was able to run fast!

Also the sprint model event on Saturday with few fast parts showed me that I should be able to run a Sprint when it really counts. Nevertheless, there was still an uncertainty somewhere in my head. 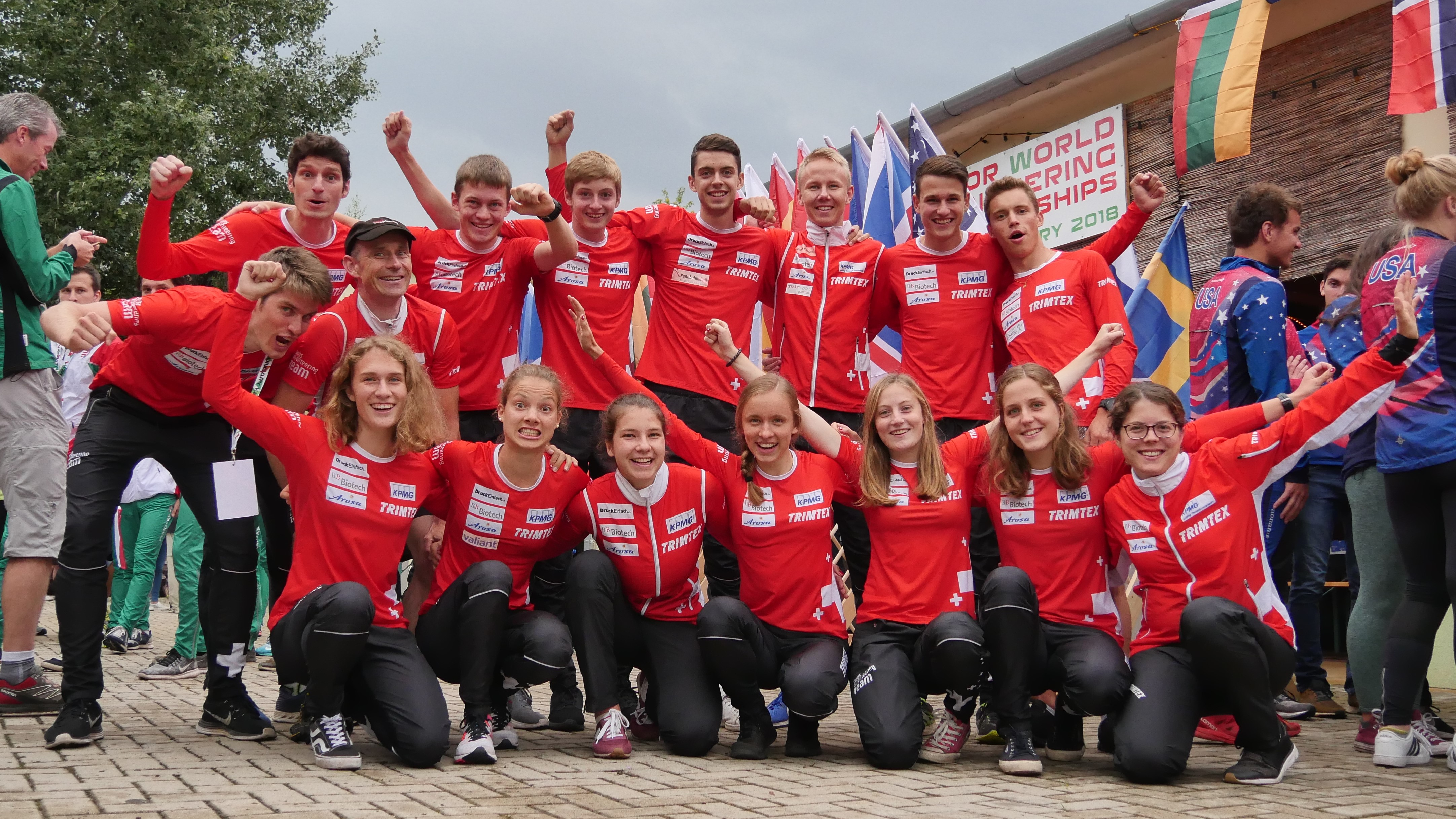 Hmm... Having some different feelings about the upcoming JWOC ;) Photo by Christian Aebersold

Some physio appointments and stretching sessions later, the long-distance day was there and I think I was more nervous than I'd ever been at a JWOC. I could still feel pain during warm up but was trying to forget about it. Well, it worked after the start when there was just no other possibility than to run as fast as possible. After a first control where I just counted on my compass skills after not seeing a checkpoint I wanted to see, I got into the famous flow and punched one control after the other without any mistake. It wasn't the perfect race as there were some little mistakes in the end but it was nearly perfect and the most important and I guess the thing which made me the most happy that day is that I could run a totally pain free 11k very fast long-distance and even win it! So there it was, the Junior World Champion Title in that terrain, that just hadn't fit me during the training camp in March. Such a nice feeling to see that I still have a chance to perform very well even without an ideal preparation. 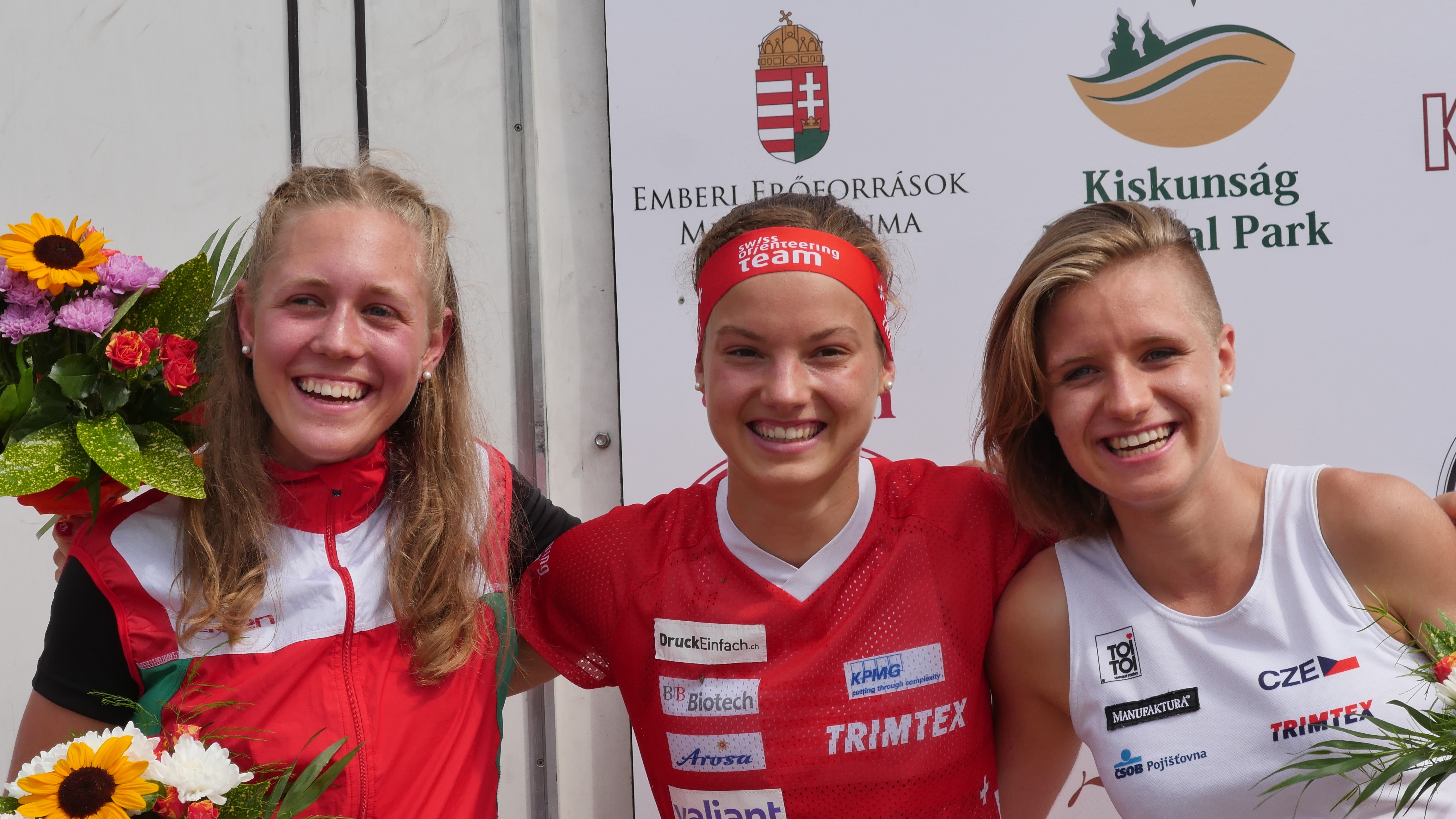 Already the next day, the Sprint took place in the centre of Kecskemét. During warm up, I had doubts if it was smart to run a sprint where I had no chance of running fast. Thanks to coach Philipp I got the needed self confidence that it would be all right after at least the first control. And so it was. I couldn't feel the pain anymore after the first control. I took a lot of time to decide the route choices but then executed them well and fast. On the arena passage I got the information that I was 40 seconds faster than the current winner. So I decided to take even more time to make sure not making any mistakes. However, I made that mistake to control 17 where I just took the second passage without realizing it and thinking I was running along the first passage. When I realized my mistake, my heart almost stopped but then began to beat even more, because I was speeding up for the last part of the race. To win the Sprint of which I had been so afraid of with a gap of 26 seconds means so much to me. It was the 4th Sprint Gold in a row and remembered me of Norway 2015 where I took the first JWOC Gold. It might not be the same surprise but definitely a huge relief for me and not expected at all. 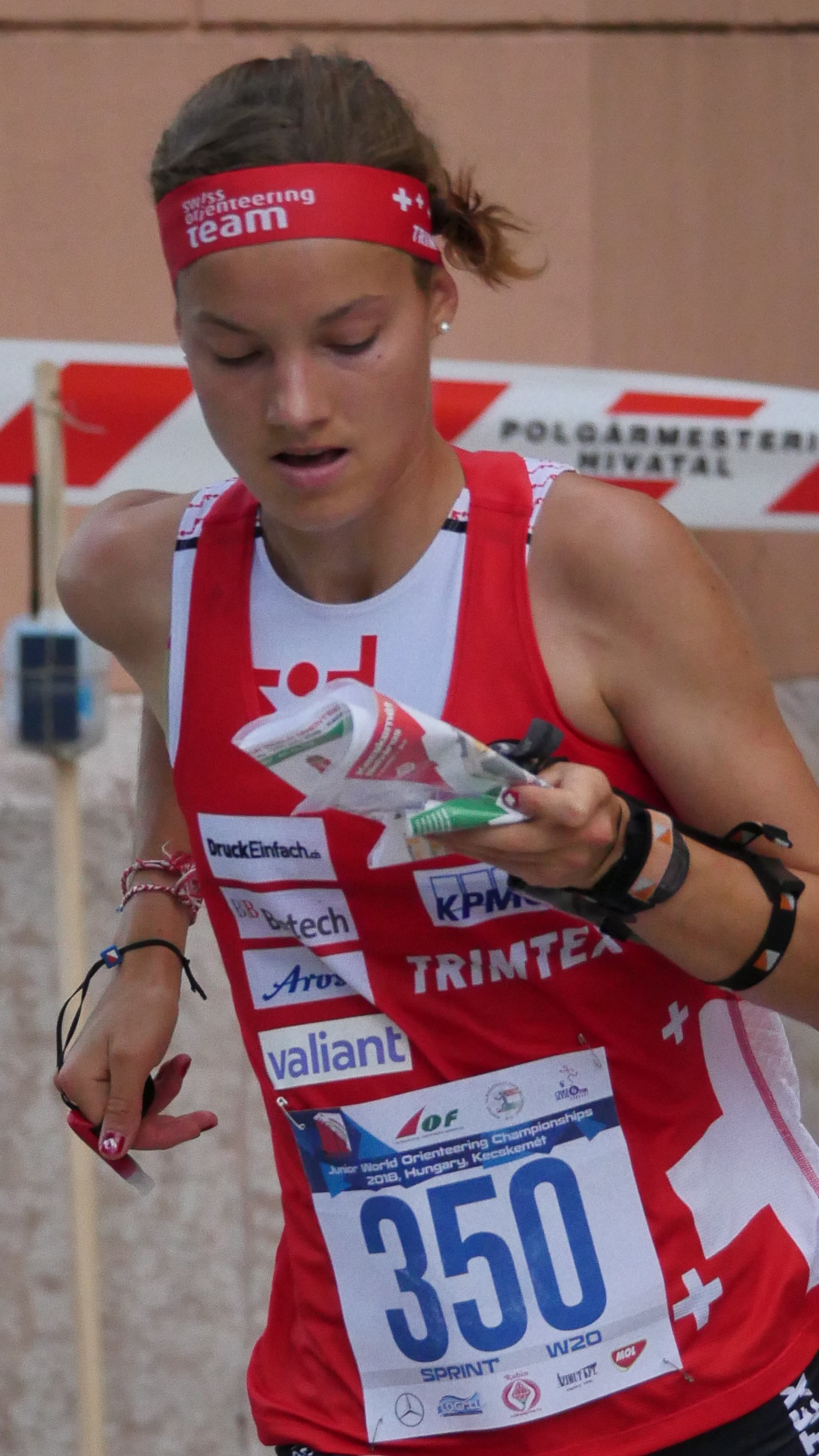 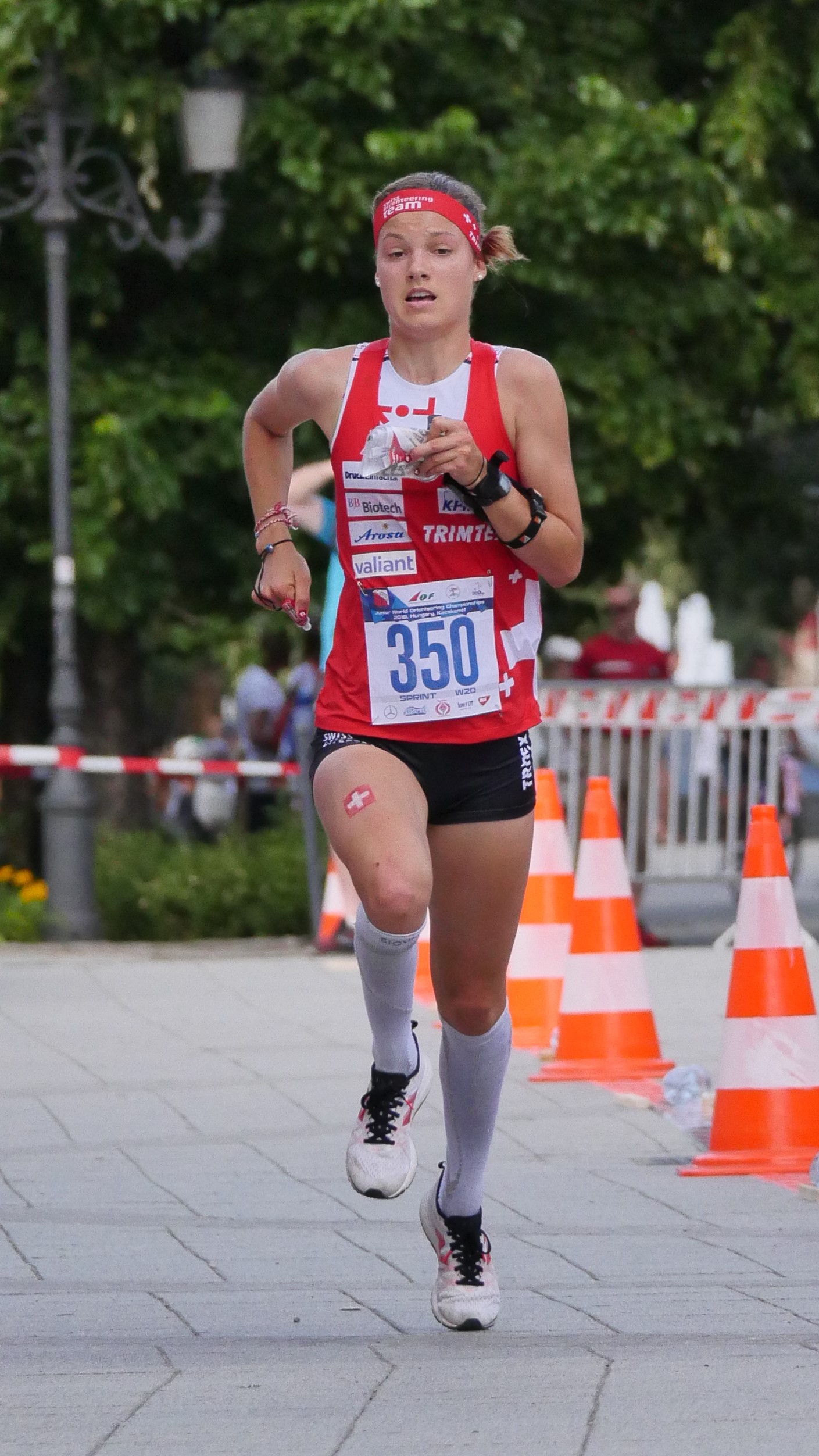 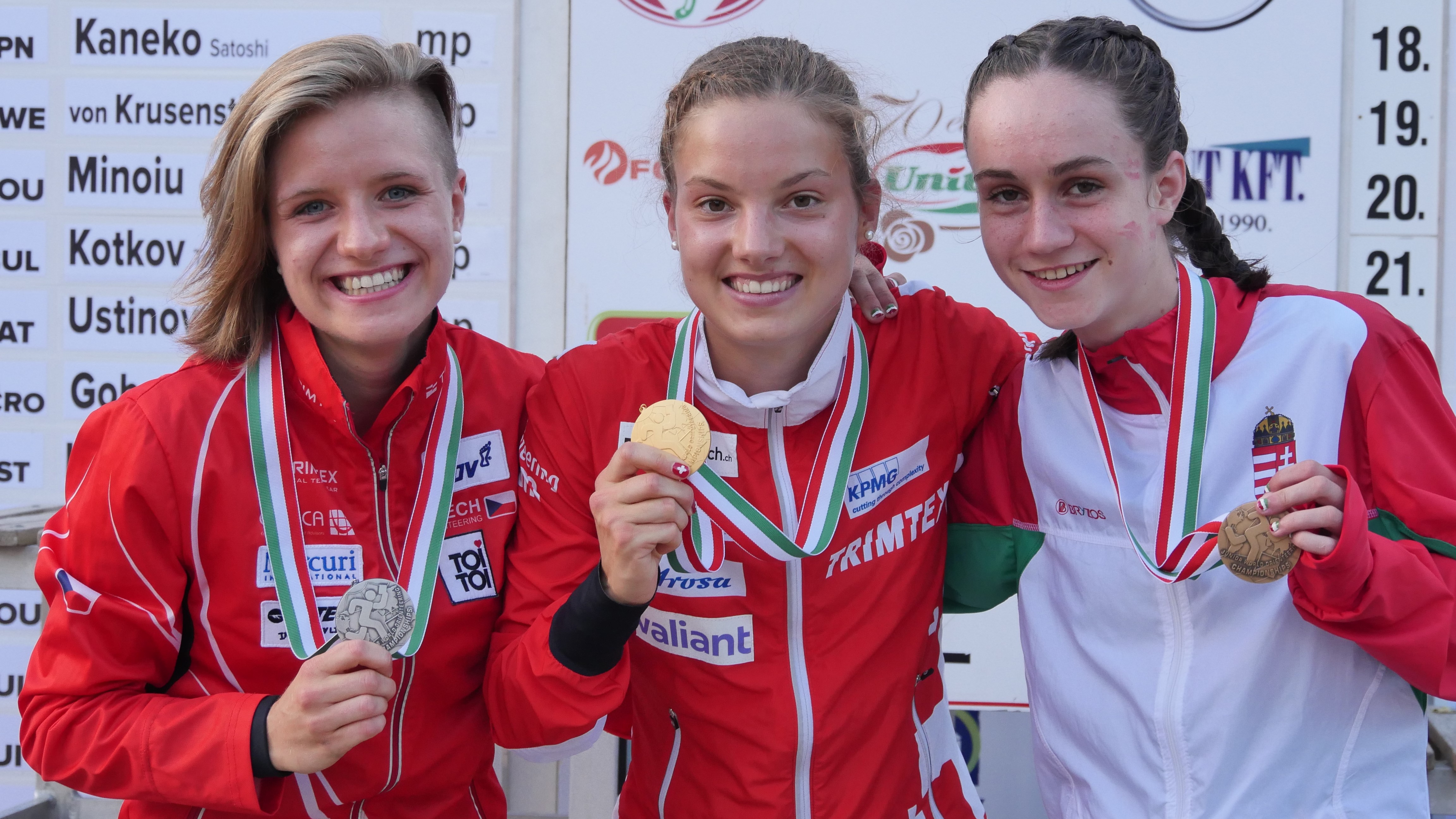 As my leg was a lot more painful after the Sprint, I decided to just walk the training on Wednesday. It was already better on Thursday on Middle Qualification, but I still felt it during the competition. It was quite hard not to think about it during the race. But luckily I only made some small mistakes and so it was still enough to come second in my heat and qualify for the final. 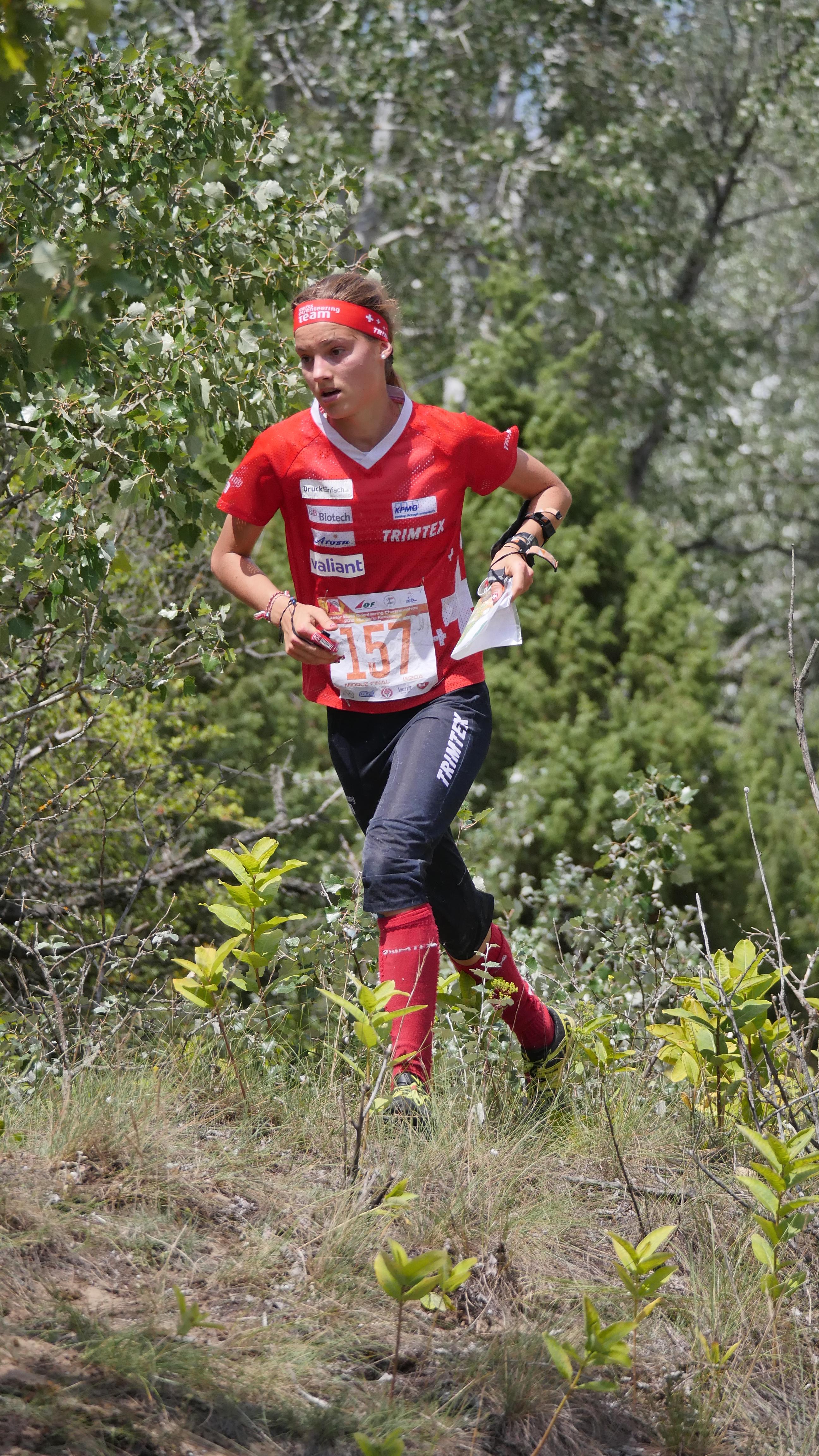 So then, the Middle day was there. After the training camp in March I was quite afraid of this special and very difficult terrain. But after a good training with my coach Phil, I was ready to face the challenge. But it shouldn't be my day. Already during the warm up I got lost in the bushes and was afraid of not getting to the start in time. Well, that was a bit too much worrying as it was not really possible to get lost there and not getting back in time. When I was back at the start, there was luckily still time to go back to that control and check the terrain again with Phil. I then found the way to the control without any problems which gave me the needed self confidence back. And the first part of the race in the bushes was then actually the best part of the race. After that good start where I could catch up with Csilla (the runner who started 2min before me and later the junior world champion), I didn't see one very well hidden control (almost ran over it) and lost one minute. Although I didn't really realise how much I'd lost there I made more mistakes and the good flow was suddenly gone. One very bad mistake just before the arena passage was too much and after all I also skipped the obligatory passage because I was just reading the map (the passage was different on the map than in the terrain) and didn't see the marked corridor after the control. This was the reason why I got disqualified. A big disappointment as I finally managed to like the terrain and found out how to orienteer in those bushes. 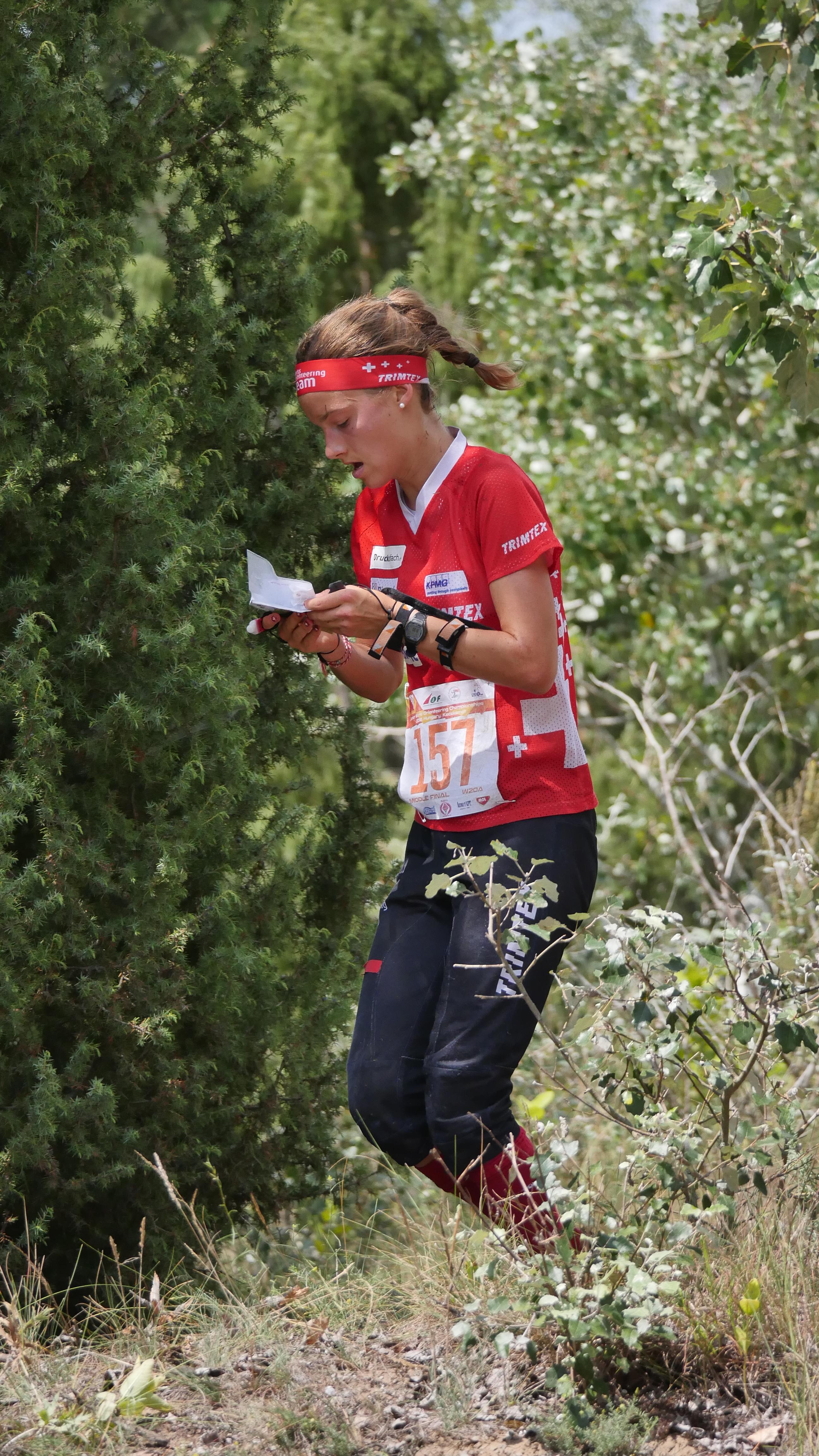 And the second big disappointment was already following the next day. After two very good races of Lea and Elena on the first two legs of the relay, I started on 3rd position a bit more than one minute behind the leader Sweden. Already on the way to the first control I didn't really get how the map was mapped as there was a lot of forest on the map, but no forest in the terrain. Well, I then started orienteering with the green and the contours, which worked pretty well until I lost myself just some 100m before the control. I saw everyone coming from behind, not really the best feeling. It felt quite easy to catch up with the others again and I finally started orienteering well. …until the 10th control. Not realizing I was in the lead at control 9 I suddenly lost the orientation on the way to the 10th and couldn't relocate myself until I saw the others coming from behind. Well, that was it, 2 more mistakes were following and arriving at the finish I was so dehydrated, overheated and just very disappointed about my own performance and sorry for my team mates who lost the medal because of me. I am definitely not used to have such a bad performance on a relay which made it even harder to accept why it just didn't work that day. 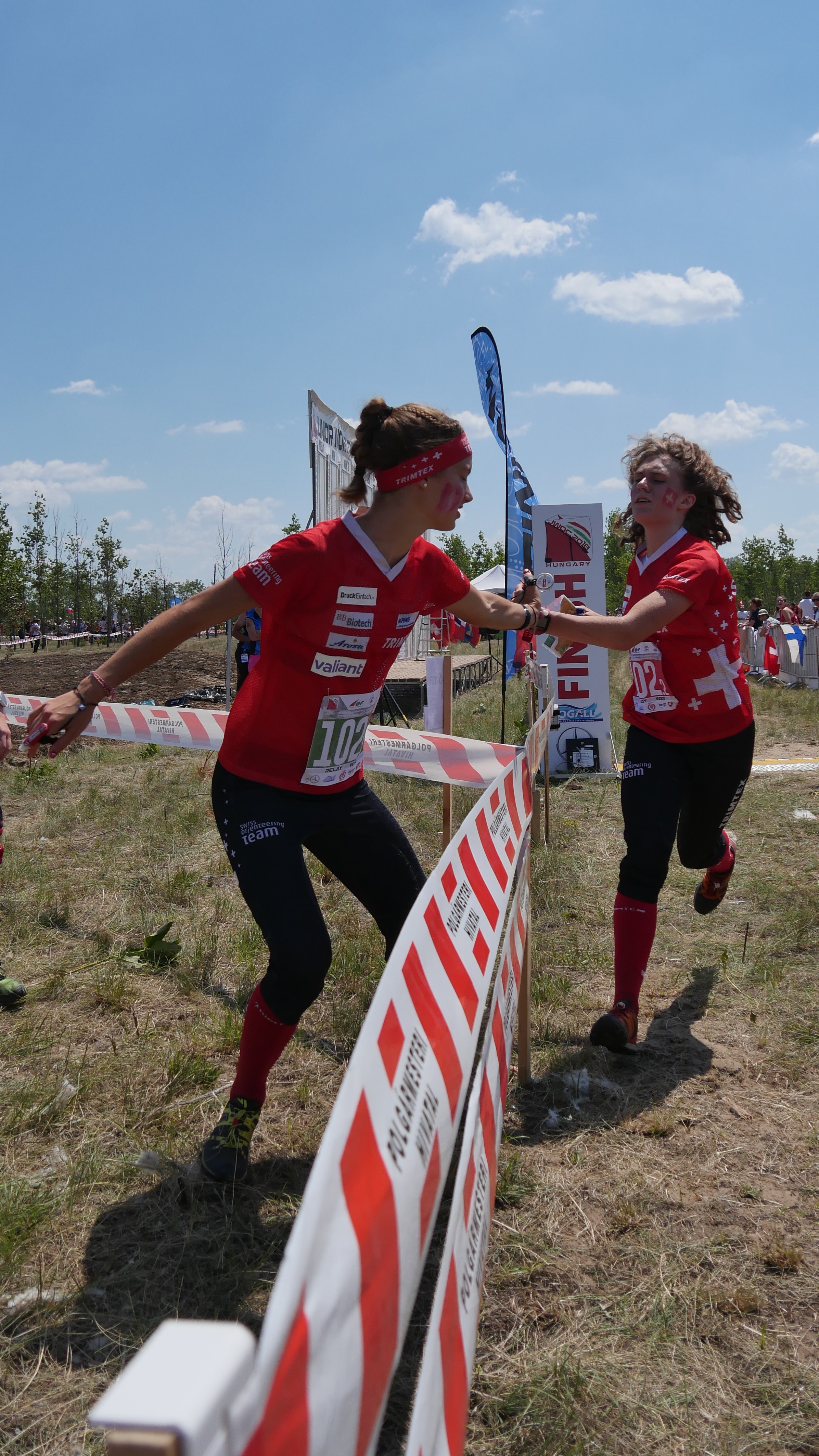 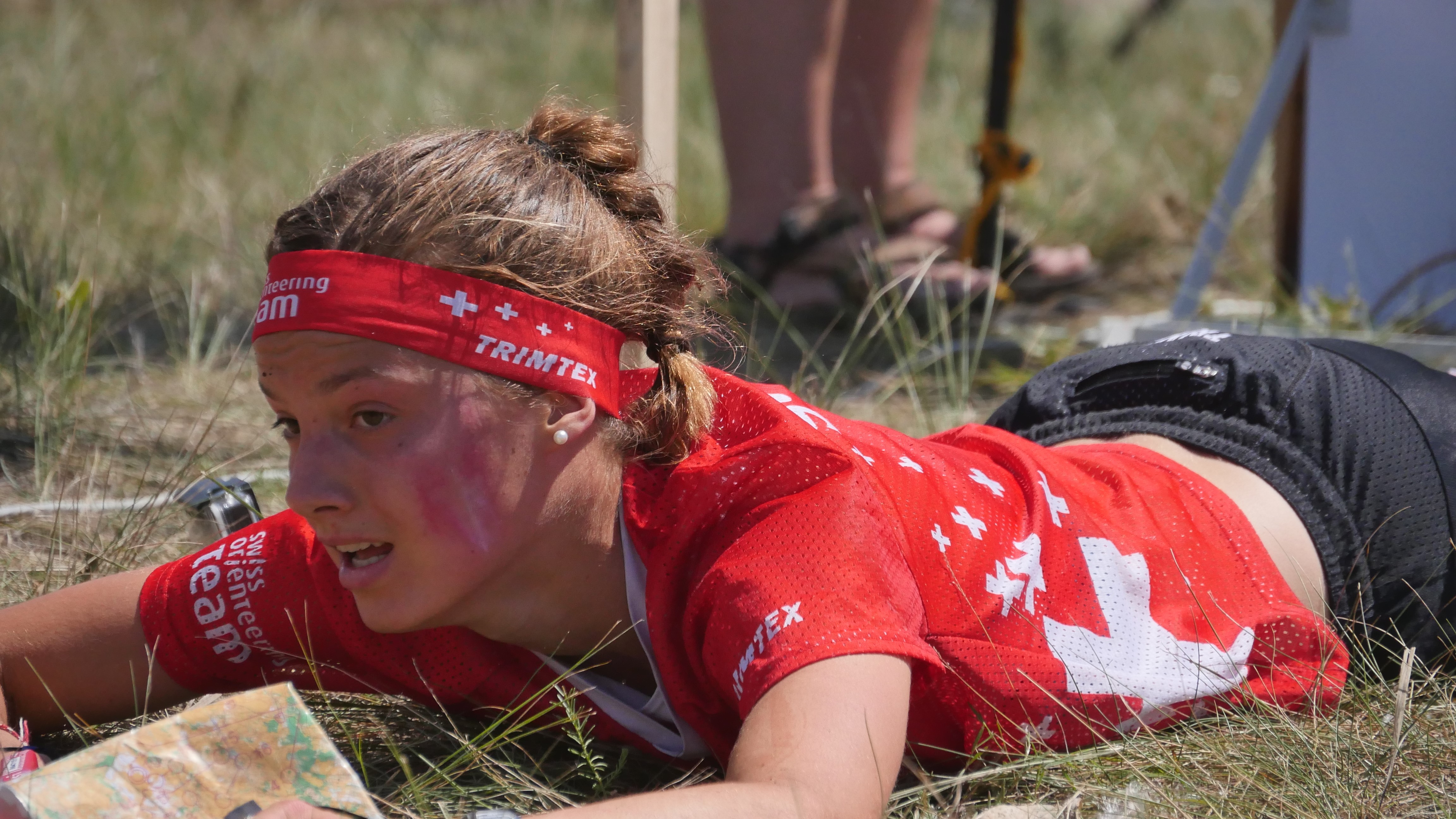 But maybe you just have to accept it and keep on moving forward. Life goes on and there are still so many competitions waiting for me and us. I will keep the good things with Junior World Champion titles number 8 and 9 which are also the last ones for sure, and so many great memories of this week. And of course I learned a lot from my mistakes which will help me to improve. Now the real world of elite sports is waiting for me in the senior's class! I am definitely looking forward to more nice weeks like the one in Ticino this spring! The time of JWOC is history now and there will only be the great memories and so many experiences which I will take with me to the higher class.

And now the well deserved summer holidays are waiting for me and I definitely hope that they will cure my leg. At least I won't do any intensive high jump anymore for the rest of my life, that’s for sure.

And to end that text, I would like to thank everyone who supported me on the way to JWOC and also at JWOC. First of all a big thanks to Marc from Physio Balance, who spent his lunch breaks to help me getting back on track for the competitions, then to Phil who helped me a lot getting my self confidence back and convinced me that my good shape would still be there and that the pain would be gone after the start, the team who guaranteed a great week and my relay team mates who cheered me up after my disappointing performance and of course physio Saskia who was like magic and always fixed my leg and prepared it for the next competition. Thanks also to Schweizer Sporthilfe, who made it possible to organize an individual training camp in Hungary in March, to Valiant Bank, OL Plus and to Str8 Compass for the good compass equipment! Thanks also to all the fans in Kecskemét and at home and to my parents and everyone I didn't mention by name. 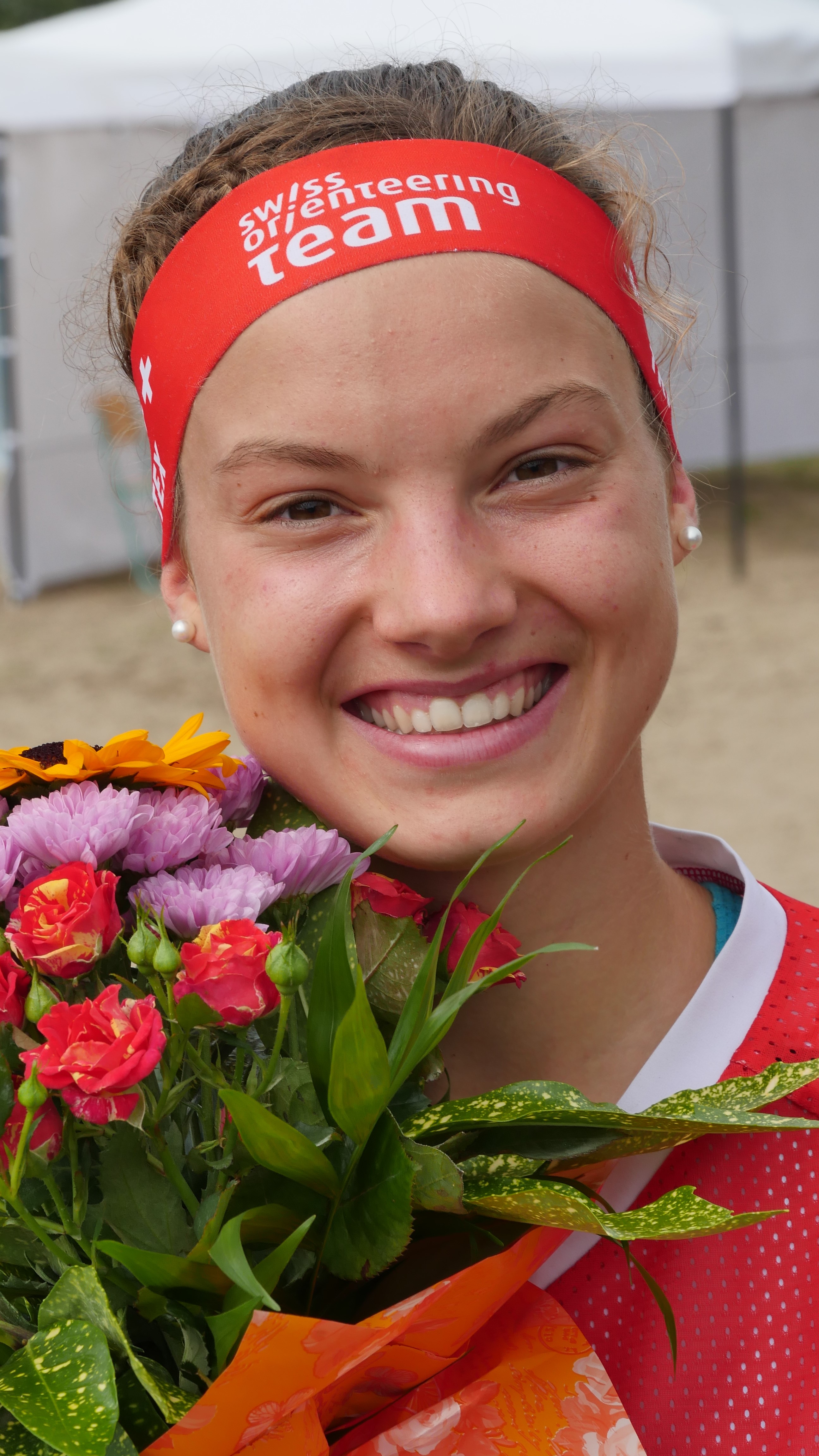