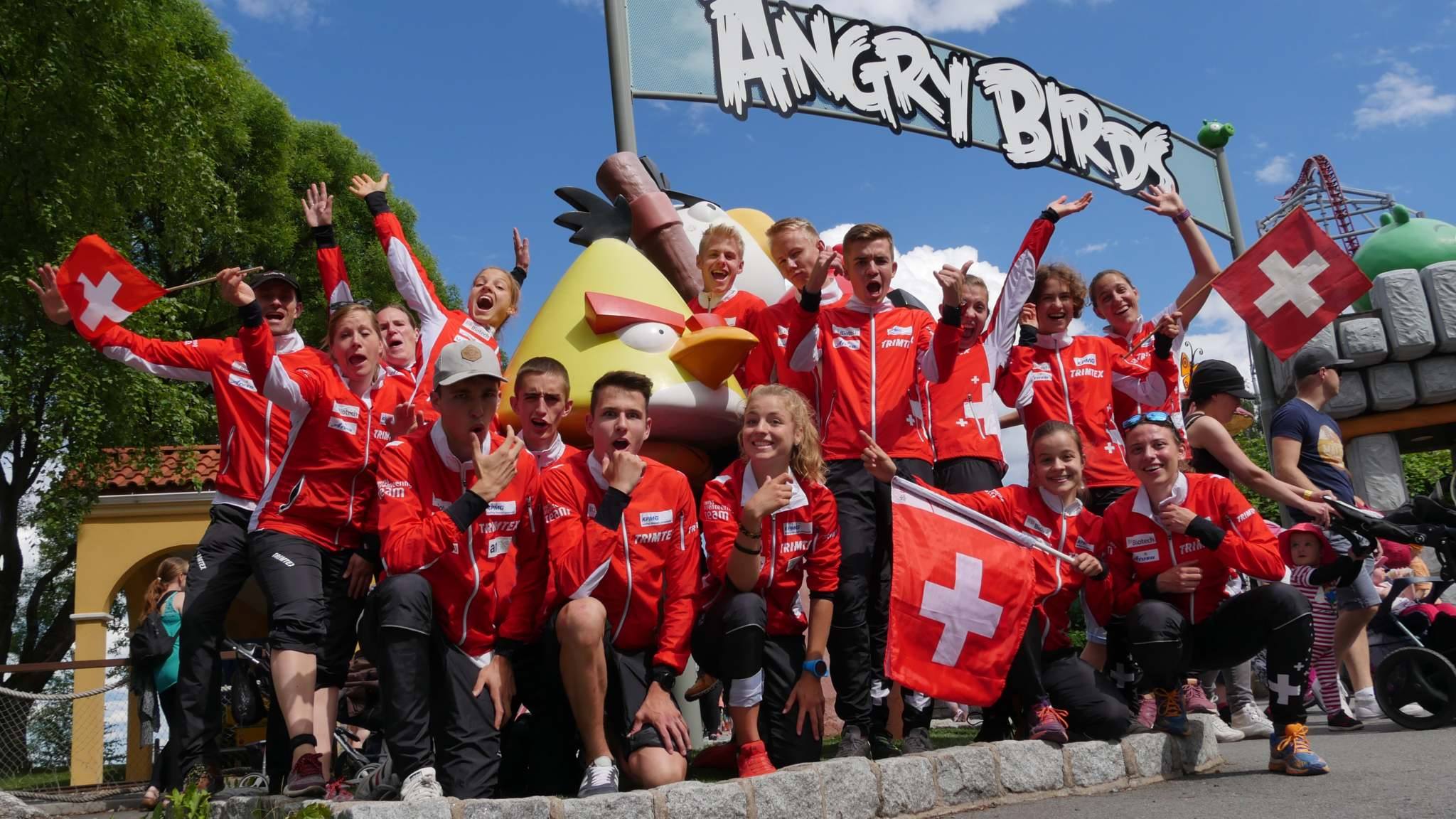 Well, also my 3rd JWOC is already over and I’m thinking about what happened during the last weeks.

The Middle-Distance Qualification on Monday was in my opinion a good way to start the competition week. I knew that if I can do a normal race, I would make it to the final. My biggest goal was to take all the time I needed to understand the map and terrain. There was only one leg, on which I wasn’t absolutely sure where I was when I crossed the road. But I managed to keep calm and take the time I needed to get the safety back. In the end, it was a very clean race and I realized that I don’t have to run so fast to make it to the final. Of course, the final would be more difficult, but I wasn’t afraid of that at that time as I gained a lot of self-confidence during the qualification race. Winning my heat meant a very good starting time for the final! 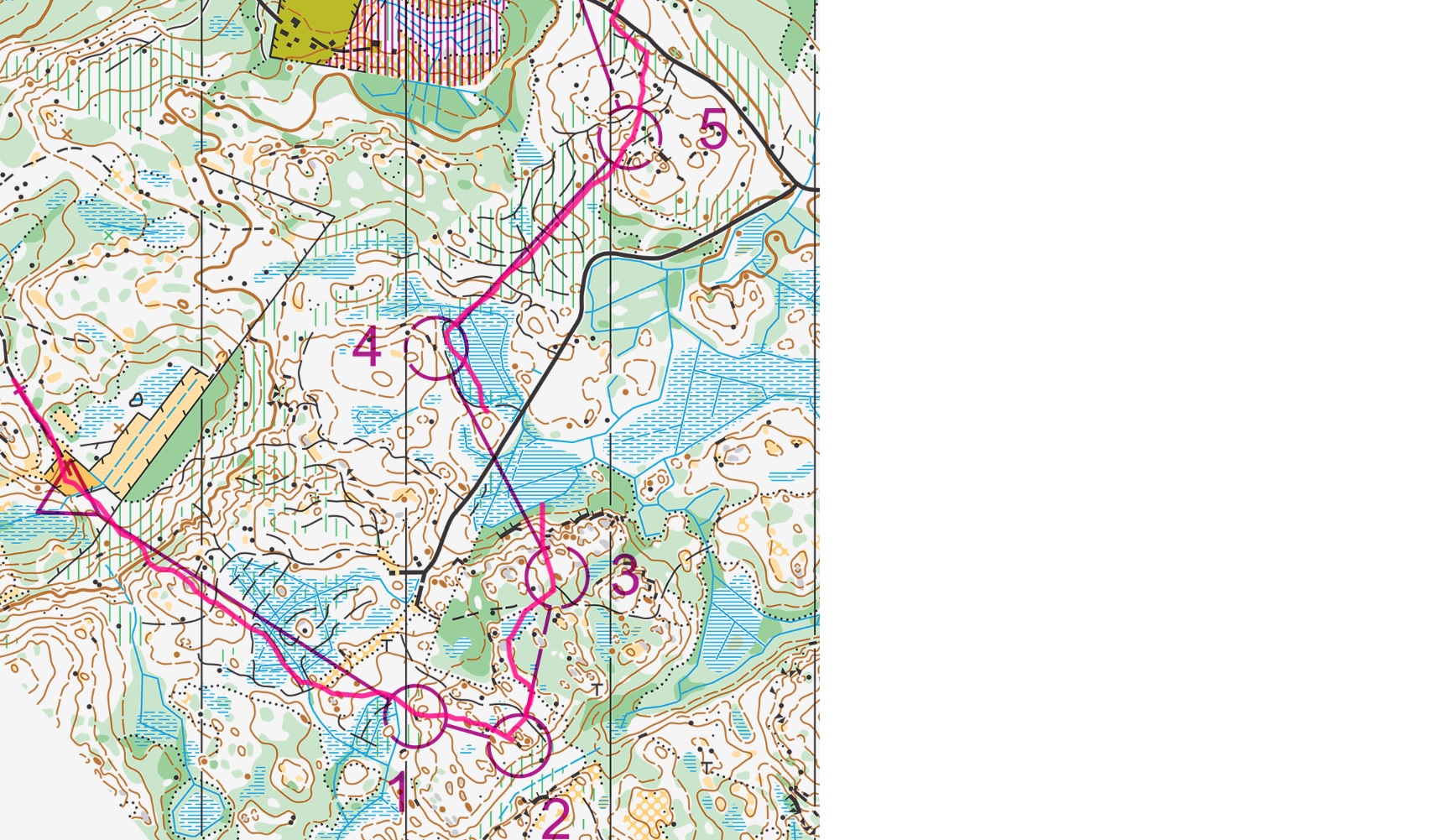 
A short time without any pressure and nervousness but after that I realized that this was only the qualification race and the final was already waiting for me.

As the A-Final was starting only in the afternoon, we had tons of time to relax and solve our second jigsaw ;) Although I couldn’t really concentrate on that because I was too nervous, it was a good occupation. I was focused when I went into the forest and knew that I must take my time to orienteer well. Already to control 1, I managed to see everything I wanted. A little insecurity to the second control where I planned to run straight but then realized that I would have to climb too much, was the moment when I had to slow down a bit. After that I found a good speed. On the long leg, I didn’t take enough time to check the direction and run too much to the right because there was so much wood on the ground which affected the runability. When I learned that I am passing in winning position at the spectator control I decided to take again a bit more time on the final loop and like this avoid mistakes. But my speed was probably a bit too high towards the end (maybe it was rather because of the power which was just gone after the steep slope at the spectator control) and that resulted in two little loops in the control centre of control 14 and 15. After that I wanted to take the path down to the arena but there were so many paths that I just took the compass and run to the right direction. In the end that was a good decision as many of the others ran along the wrong path. To be able to enjoy the whole run through the finish line with a swiss flag is an amazing feeling! I have only been dreaming about such a good race at JWOC in Finland. 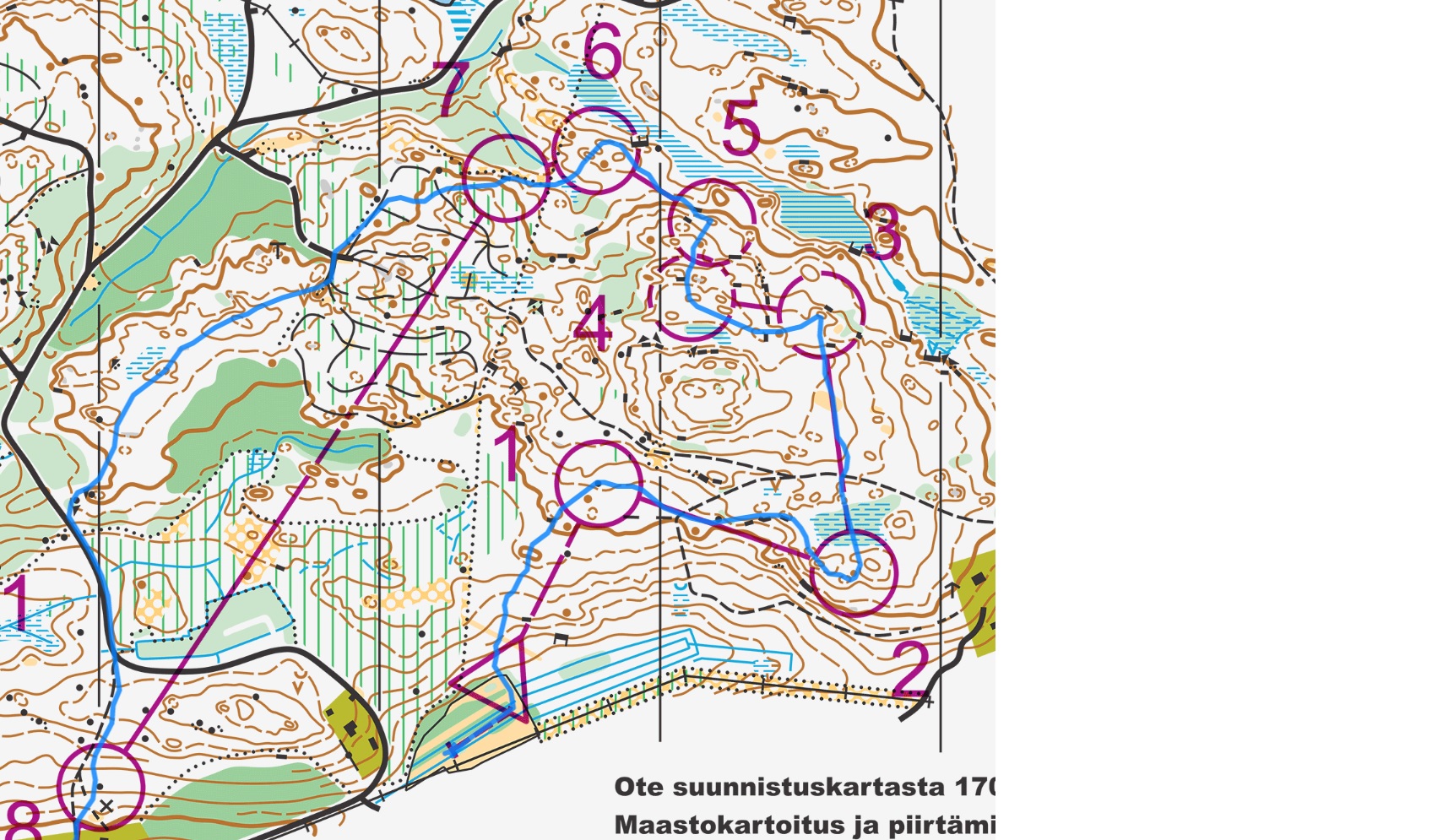 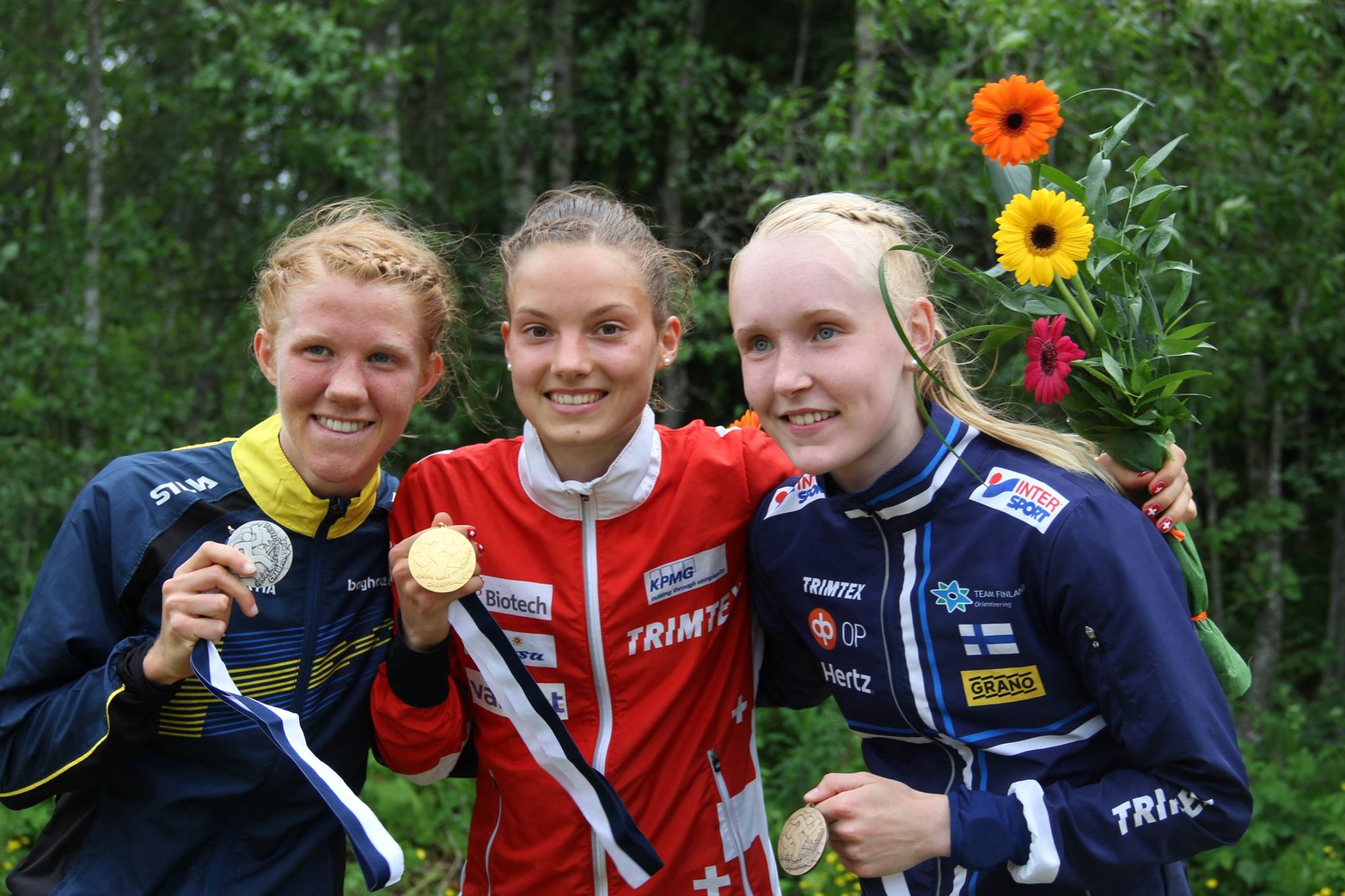 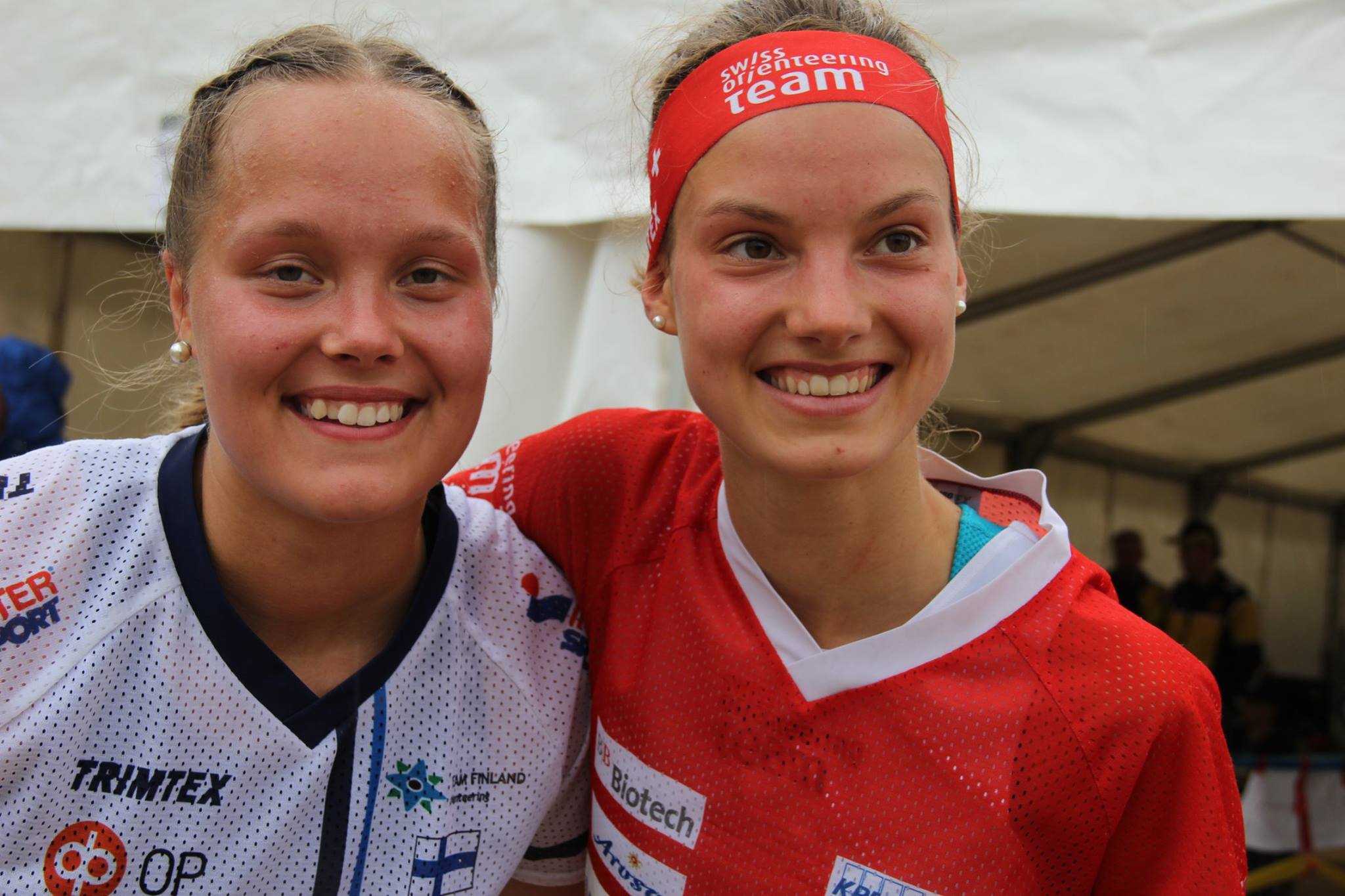 The Middle done and the focus was already on the sprint race. To be honest, this was the only race of which I was a bit afraid. On Sprint, everything happens so fast and also the mistakes are rapidly done. As probably almost everyone, I was quite surprised that they only used the lower part of the whole map. Already at the start I got a bit stressed when the corridor was so narrow that you could only run behind the M20 runner. This resulted in not knowing where to go when I arrived at the starting point. The first moment when I had to stop to read the map. And due to not taking enough time for planning, I also took the slower route to control 1. Luckily, I could concentrate again after the bad start and my race got a quite clean one. There was only one bad moment when I realized that I was running towards a closed passage and had to change my route. The cheering Pyrintölaiset gave some extra power to my tired legs.It was a quite special sprint for me to which I am not really used. I trained quite few sprints the last year and particularly typical sprint around buildings in the city and not in park area. It was new for me to use the compass so much also in sprint and to involve the open areas in my planning. But as I was well prepared for that race, I knew already before what challenges to face. Finally, my performance was enough for the victory, which was the third JWOC Sprint victory in a row after Norway and Switzerland. It was a very tight race as Tereza Janosikova just lost seven seconds and Linnea Golsäter 19 seconds. It’s amazing that I could again show such a clean race after winning the middle distance. The Mexican dinner with my family in Tampere and the upcoming rest day were definitely well deserved. 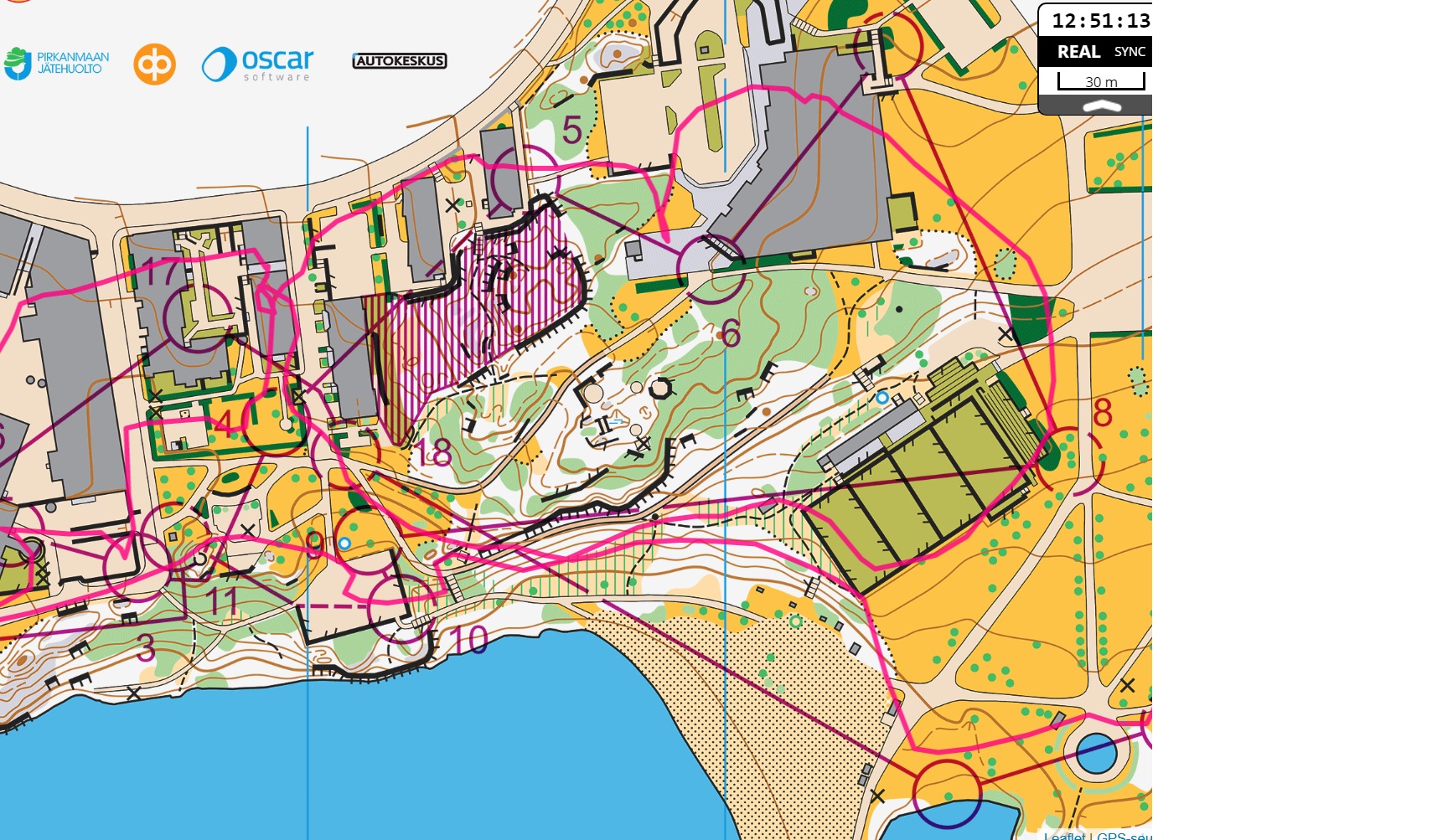 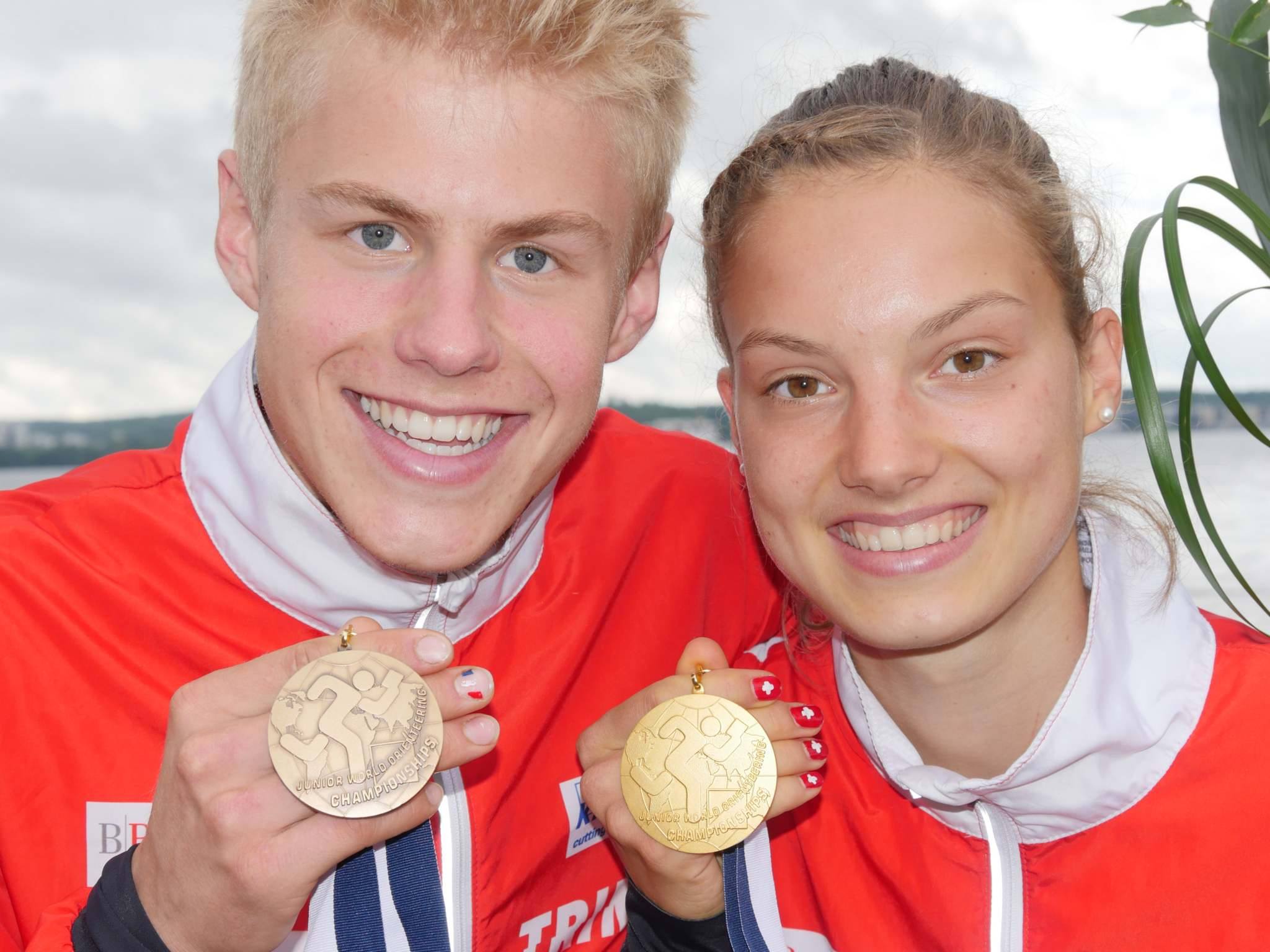 
With the model event for Long distance and Relay in the morning and a team program with the Danes and Norwegians the rest day was quickly over. I really enjoyed the terrain with lots of bare rock hills for Long and Relay and felt ready to face the challenge Long distance. This time without forgetting any control ;) I’ve got the chance to be the third last starter of W20, so at least that was a good starting position. I again knew that I had time to take the time I need to orienteer well and that was what I did. Already at the first control I saw the runner who had started two minutes before me and that gave me some self-confidence. On the other hand, I knew that I had to watch out not making any stupid mistakes now or increasing my speed as that mostly happens to me when catching up with others. I focused on my own orienteering and continued my race as well as I had started it. Just before the long leg from control 10 to 11 I stopped to decide the route. It seemed like it was a quite decisive one, so I thought the time spent on planning was well invested. In the end, I learned that both routes, the one straight and the one around on roads, were quite equal if you executed it well. With my decision to run around, I was on the safer side not do make any stupid mistakes or loose time in the green. When I came to the control from the back side I saw Veera coming from the control, so I could guess that I was running for a good ranking. After that control I was totally running in the “blue” zone, my legs were really tired and I felt like creeping up the last hill. Coming to the finish after another clean race in Finnish terrain was an amazing feeling and knowing that I just won the famous “Long” was just unbelievable. I have always been dreaming of a medal on Long distance, but that it’s happening in Finland and that it’s even the golden one is incredible. 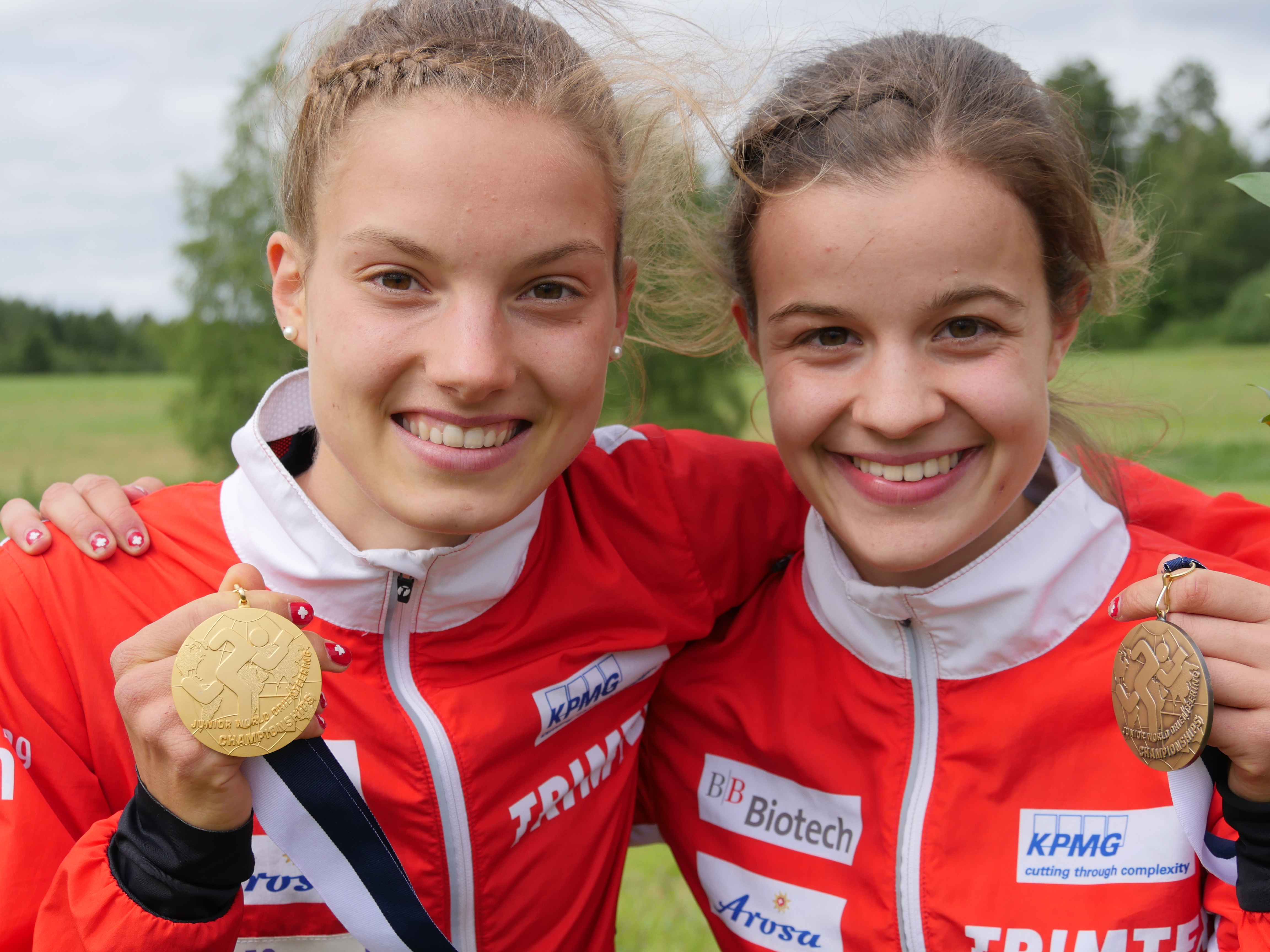 
But after the race is before the race. Only the individual races were done and the relay was still waiting for us. With Valérie Aebischer and Sofie Bachmann, our team was one of the favourites and we knew that everything was possible if everyone is doing his own normal race. After Valéries good race on the first leg, Sofie headed out in 3rd position only 2min behind Norway and some seconds behind Sweden. Sofie felt quite tired though, but she did another clean run and came back still in 3rd position and still 2min behind Norway. So it was my turn on the 3rd leg. I made already one small mistake to the 2nd control, which took a bit of self-confidence away and resulted in not having a good plan for control 3 and that again meant another mistake which took about 30 seconds. So I was quite surprised when I saw the Norwegian girl on the way to control 4. Although my self-confidence didn’t come back until the finish, it was not a bad race. In contrary: there were many controls where I orienteered very well. But after the very good races on Middle and Long distance, I wasn’t very satisfied with my final performance of JWOC 2017. But we’ve got a very beautiful silver medal which is a perfect conclusion to our competition week and about which I am very happy! 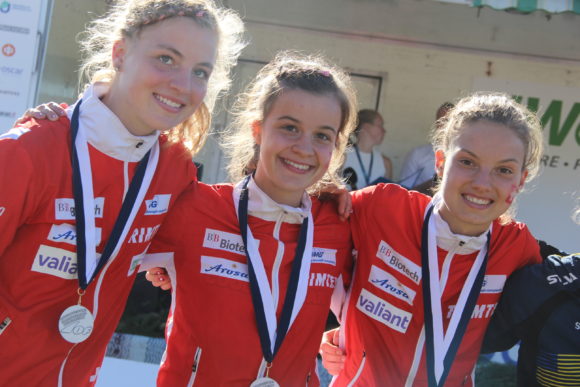 For me it was a week I haven’t ever dreamt about. Three victories of three individual races and a great silver medal with the relay! To be honest, I was always a bit afraid of Finnish forest because it looked so difficult and tricky. That now completely changed after JWOC and I know that I can orienteer very well also in those forests. I think there’s a huge thank you to tell everyone who supported me during the past years. I would like to especially thank Janne Märkälä for his efforts explaining how to orienteer in Finnish terrain and how to avoid those big mistakes from Grano Games. Another thanks to my second family, family Haanpää. They are always there for me, doesn’t matter what business. Tuomo who set so many courses for me to improve my orienteering skills! All those trainings in Finnish terrain didn’t only pay off for JWOC but for sure also for the future! I gained so much experience and finally was able to show what I had learned at the right moment.
A big thanks also to my sponsors Valiant, Ssport and Sporthilfe Schweiz who made my Finland-Year possible!!!!! 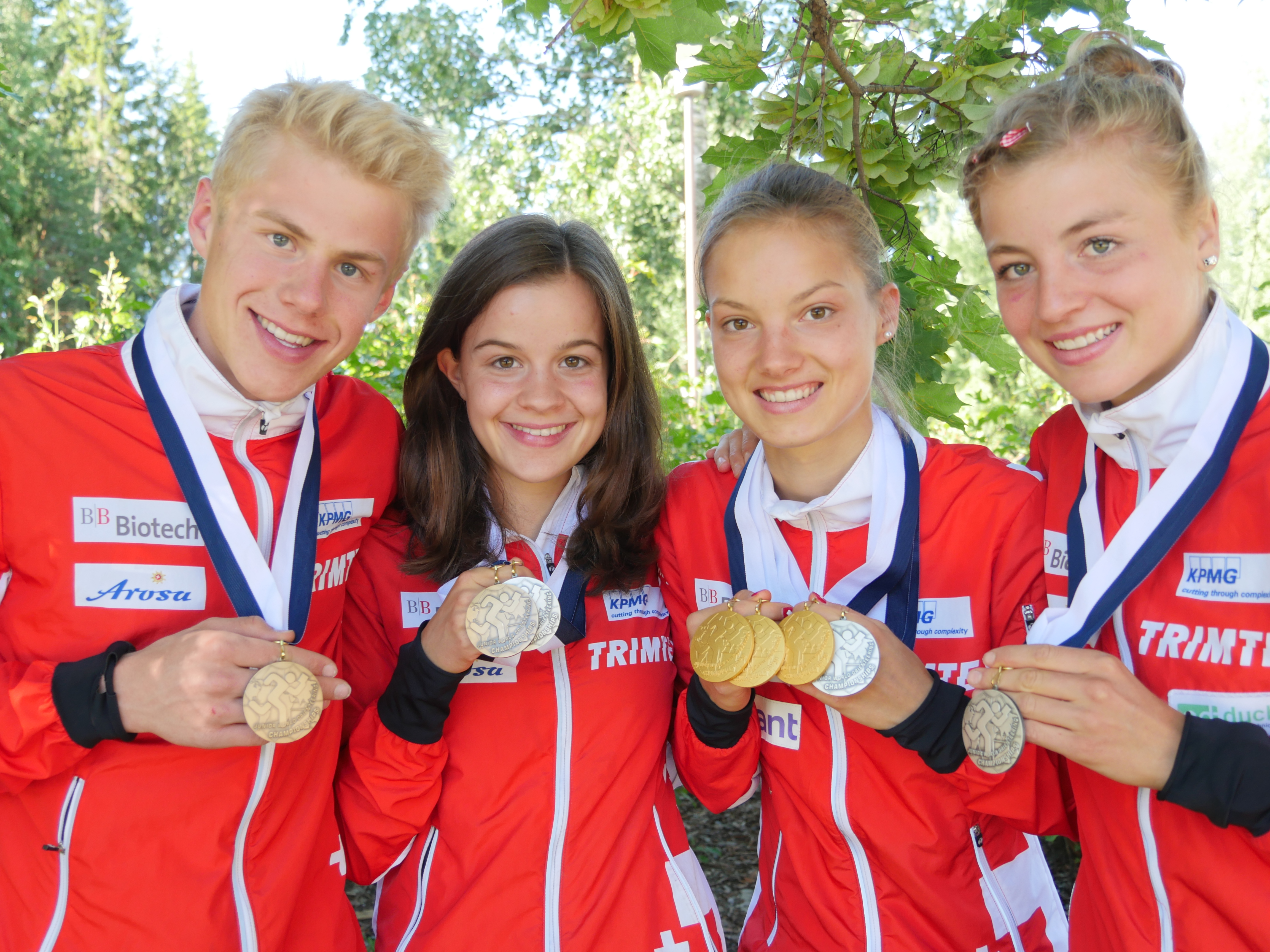 
Also, I have to say that it really felt kind of like a second home JWOC as there were so many Pyrintö people but also Swiss people cheering. During the last year I got to know so many people and I also got to know Tampere and the surroundings, where to go and so much more. The landscape and the terrains got familiar to me and also I got to understand a bit of the Finnish language. 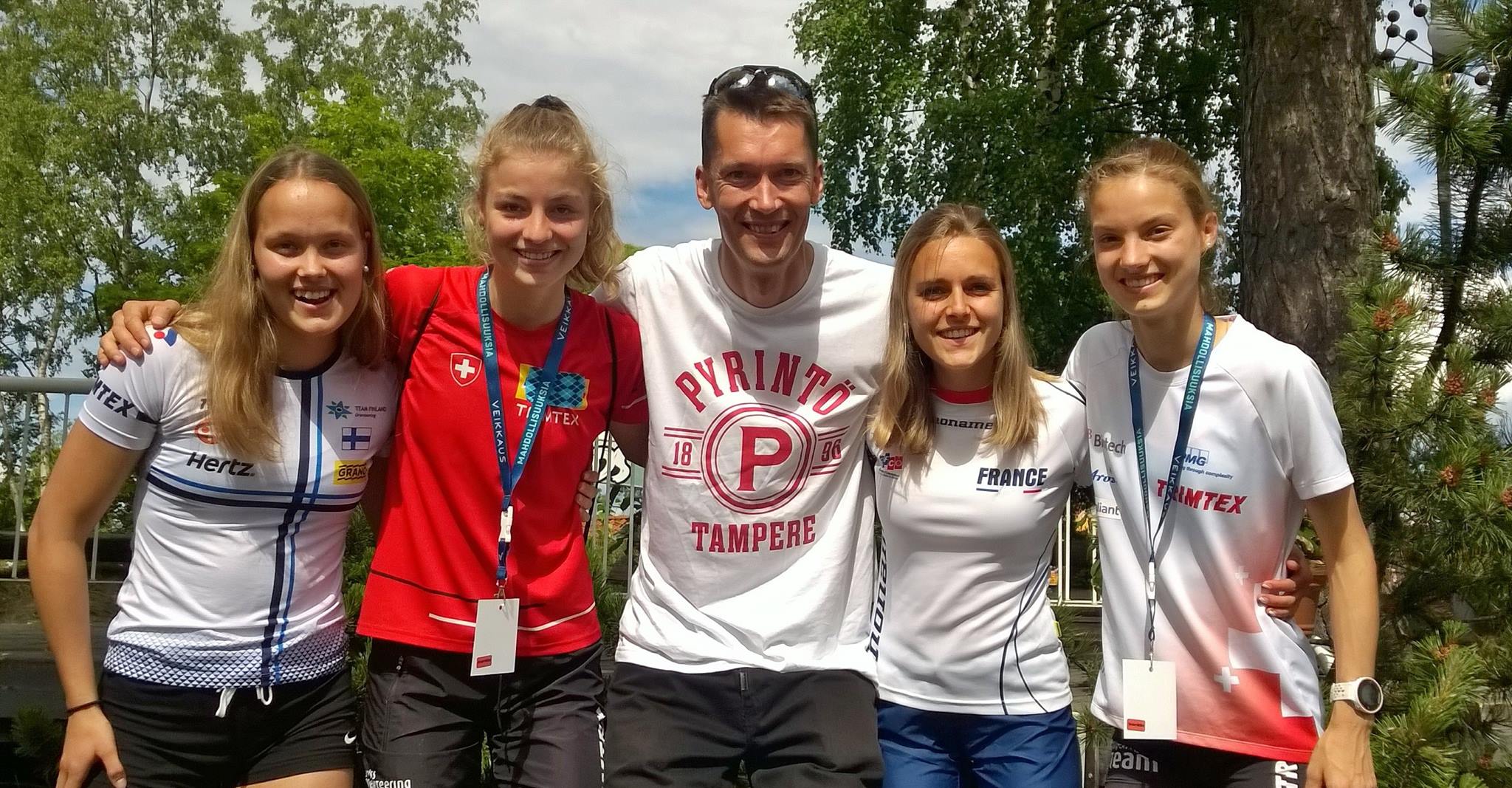 The importance of Pyrintö is huge! Coach Janne Märkälä in the middle! 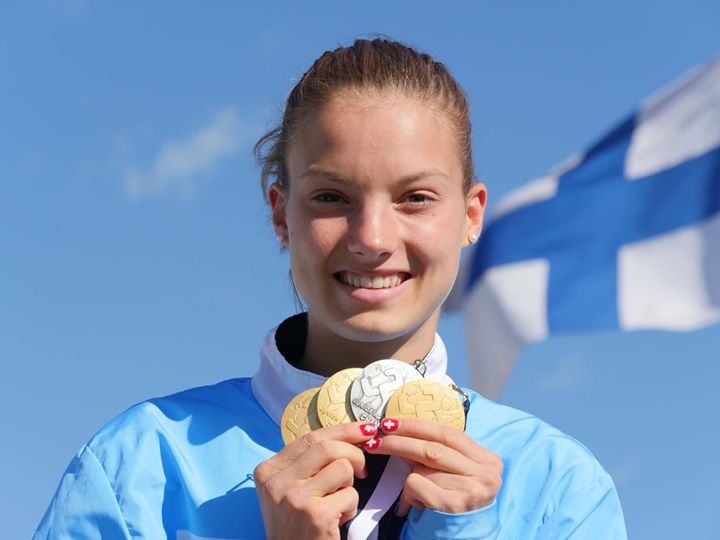 
I am sure I will come back home to Finland soon ;)