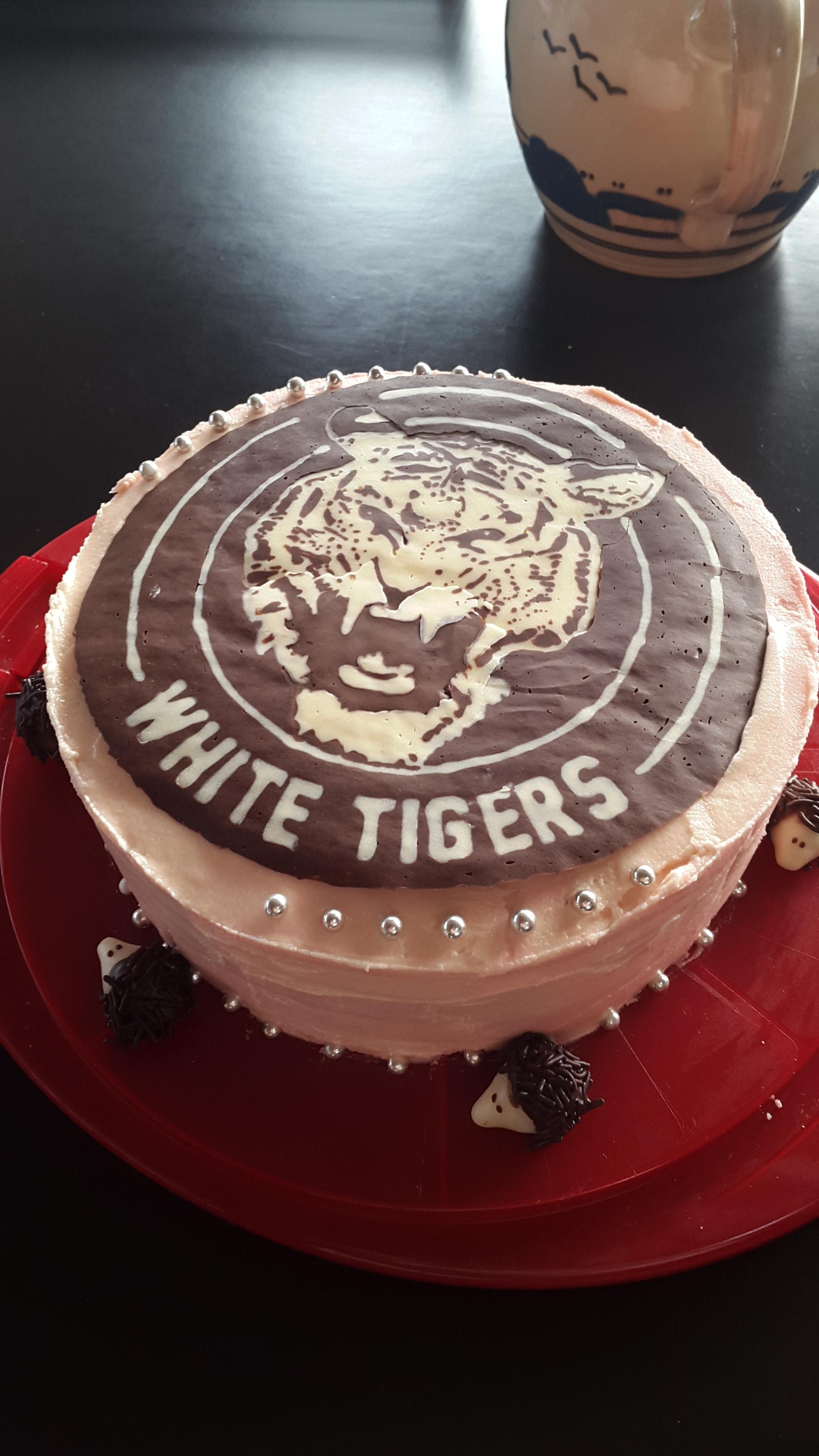 After two weeks in Switzerland, where I didn't really have time (or maybe didn't want ;)) to write something, I am now back in Tampere and will write about the last weeks.

The first couple of days at home were very beautiful. The sun was shining and it was warm (about 15°C warmer than in Finland ;)). I was able to do some garden work and go to the forest, looking for chestnuts. The only problem was that I decided to make a two weeks trainingbreak, so I almost had too much time. Luckily there are good friends with whom you can go ice-skating or you can take your bike and accompany your trainingmates when they're doing their usual running exercise. Or you can go hiking to the nearest hill to search the snow (and I really found it!!) and then eat some christmas cookies on top. Also one of my favourite activities: the club training on Thursday, where we first play floorball and afterwards do some strength training. Not to forget the club meeting of ol.biel.seeland on Friday with much fun and good food.

Result of too much time: Selfmade White-Tigers cake

On the first weekend in Switzerland I went to a meeting of the regional squad in Basel. On Saturday there was a team orienteering training, last possibility to train the procedure of the next days Swiss champs in team orienteering.

And then the "big" day started. My team was the same as last year, namely the best one ;) With Joana Wälti and Kerstin Ullmann we had the possibility to participate as a club team for ol.biel.seeland in W21. For this year the organizers came up with a new competition form as there was a massstart where all the teams were starting at the same time. In my opinion a very good idea, which makes the whole thing more interesting. Almost all the teams actually decided to change at the second control but everyone missed eachother, so they just continued. Because there was a long leg after that control, I didn't know what to do as I didn't want to do half of the course on my own. I think it wasn't a bad decision to wait for my second runner there in the end. Like this, I was able to safe power for the last loops after the first control, where the whole team had to be at the same time. So I could do the next long leg full speed and catched up with many other runners. That in turn, gave me even more power for the rest. I again changed over to Joana, she changed over to Kerstin, in the end it was again my turn. I was very surprised when I saw many other teams at the second last control and gave everything I had to win them. But as they changed over just after the control they had a better chance and finally got 4th just in front of us. As always this was the last big competition for this season and it was so much fun running it with Joana and Kerstin. 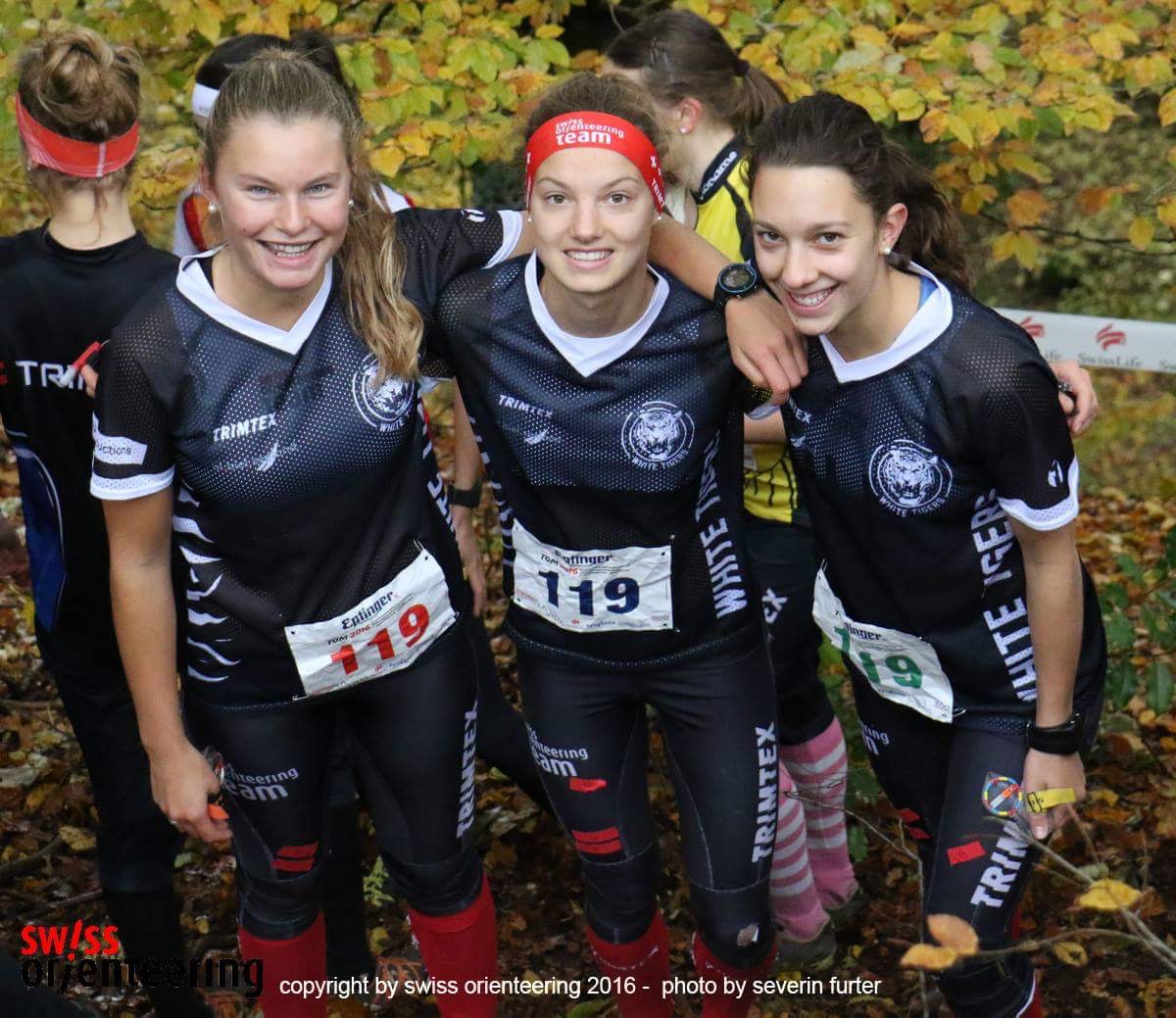 Beside building up the new furniture in our basement DuoNol was waiting for my brother Fabian and me. It's always a very nice night-orienteering competition in pairs (1 woman and 1 man). Certainly, we had big goals ;) Maybe we were running a bit too fast sometimes so that we made two bigger mistakes at the beginning. After them we managed to speed up, I read the map, Fabian punched the controls. Our teamwork was nearly perfect in the end, so that we got second, just one minute behind the winners (Simone and Matthias Niggli). The traditional spaghetti-party afterwards was well deserved.

On Saturday SwissOWard in Olten was the next big thing. It's there where all the price-giving ceremonies and distinctions are held. In addition, there were two special awards this year: the most likeable relay-team and the most likeable athlete. Everyone who had won a medal at world or european champs in 2016 was nominated and there was a public voting that evening. Very nice to see that all the prices were won by juniors;) 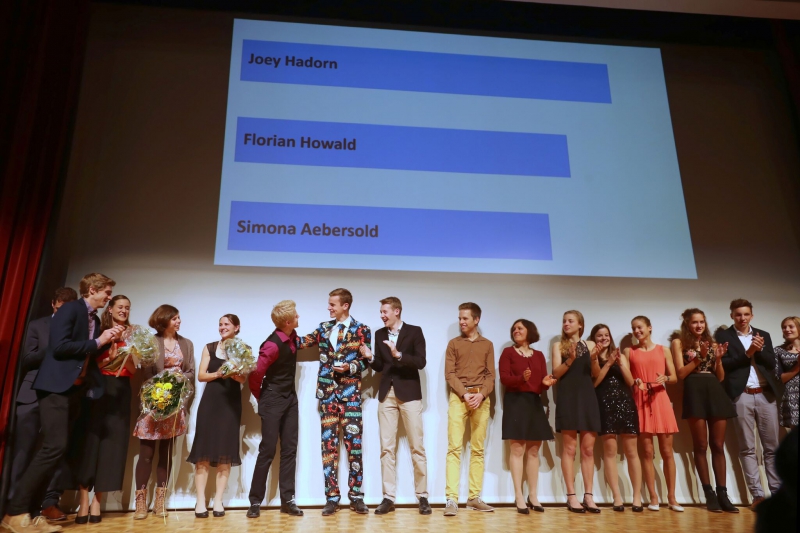 Nominated athletes for the most likeable athlete of 2016 and podium, Photo by Swiss Orienteering

And then it was already time to leave for Finland again. I was not so sure if I should be happy to go back, as I thought it would be very cold and dark, and difficult to do my usual trainings because of the snow. But just after arriving in Helsinki, I knew that I was going to spend a nice time here. There was a lot of snow on the ground and I felt like going to ski-holidays ;P

Testijuoksu (test run) in Pyynikki (where the JWOC sprint next summer will be) was a lot of fun even though it was raining very hard. I enjoyed the feeling to run up to a hill in Finland. With 30.30min and the resulting 6th place in the overall womens ranking, I am very happy with my performance, also because I felt very well during the whole race. And next time I will have better requirement as I will know the course and won't go up the wrong stairs first and also will be able to focus on my running without being afraid of taking the wrong paths ;) Anyway, I can't wait for the next Testijuoksu :) 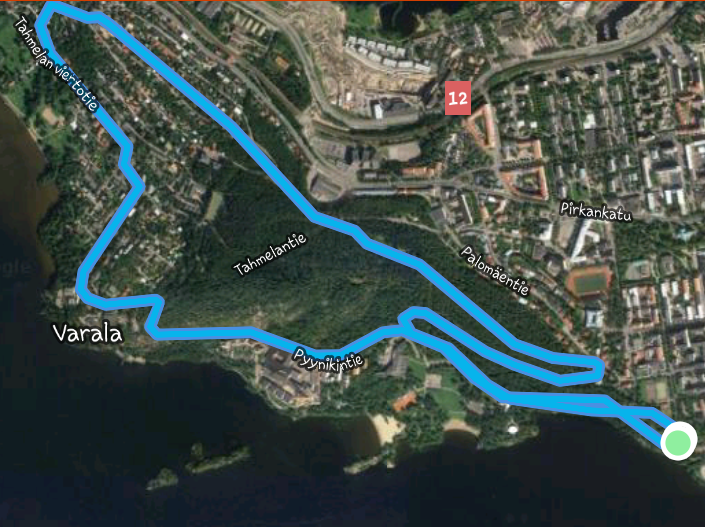 A nice end of the day was for sure the evening with many Punahilkka at my place with a lot of nice food and interesting discussions ;) 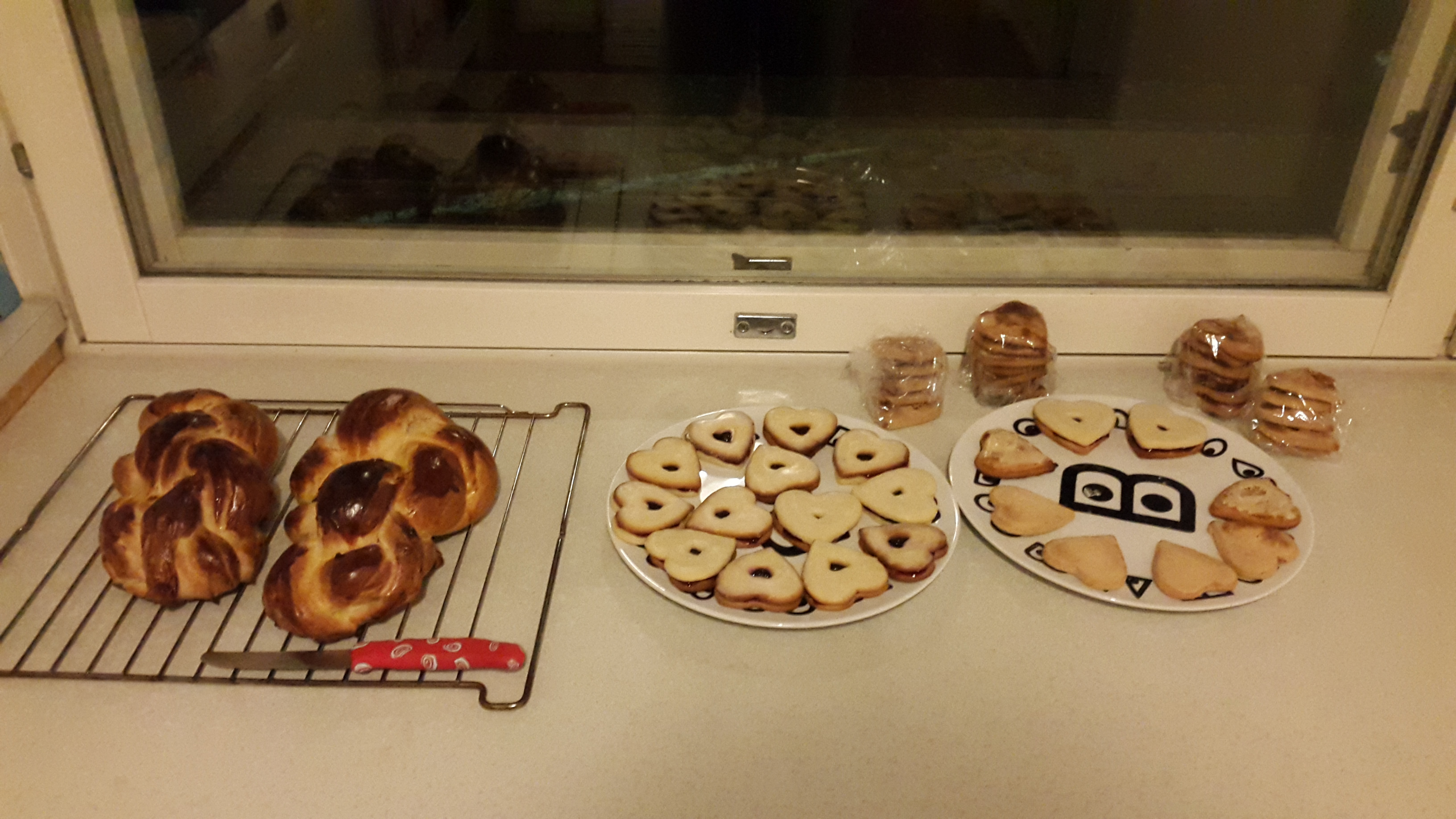 Result of one afternoon spent on baking for Punahilkat-evening

Well, the longrun on Sunday in Koukujärvi was maybe a bit too much. But it was definitely worth doing it and I would do it again everytime even though I felt a bit ill and tired the next day (I think I spent the most time of the day on the sofa and sleeping ;)). The last time I was in Koukujärvi, was 3.5 years ago and it was also my first orienteering training in here Finland. I can remember that I was not able to stop running in the forest and so I did some extra loops with my father until he dragged me out of the forest ;) In order to train for Jämsä-Jukola 2013, Pyrintö was doing a training there with sauna and lunch afterwards. I would say I can even call it the beginning of everything here. But back to pitkälenkki in Koukujärvi... A highlight was for sure already the meeting with two elks on the way to the parking place. Even though the weather wasn't that good that day, it was a great experience and very beautiful to run around those lakes and through that really nice forest. And with this adventure another weekend came to an end...

Aaand I can tell you, my Finnish is getting better every day ;) At least I can conjugate verbs now :') 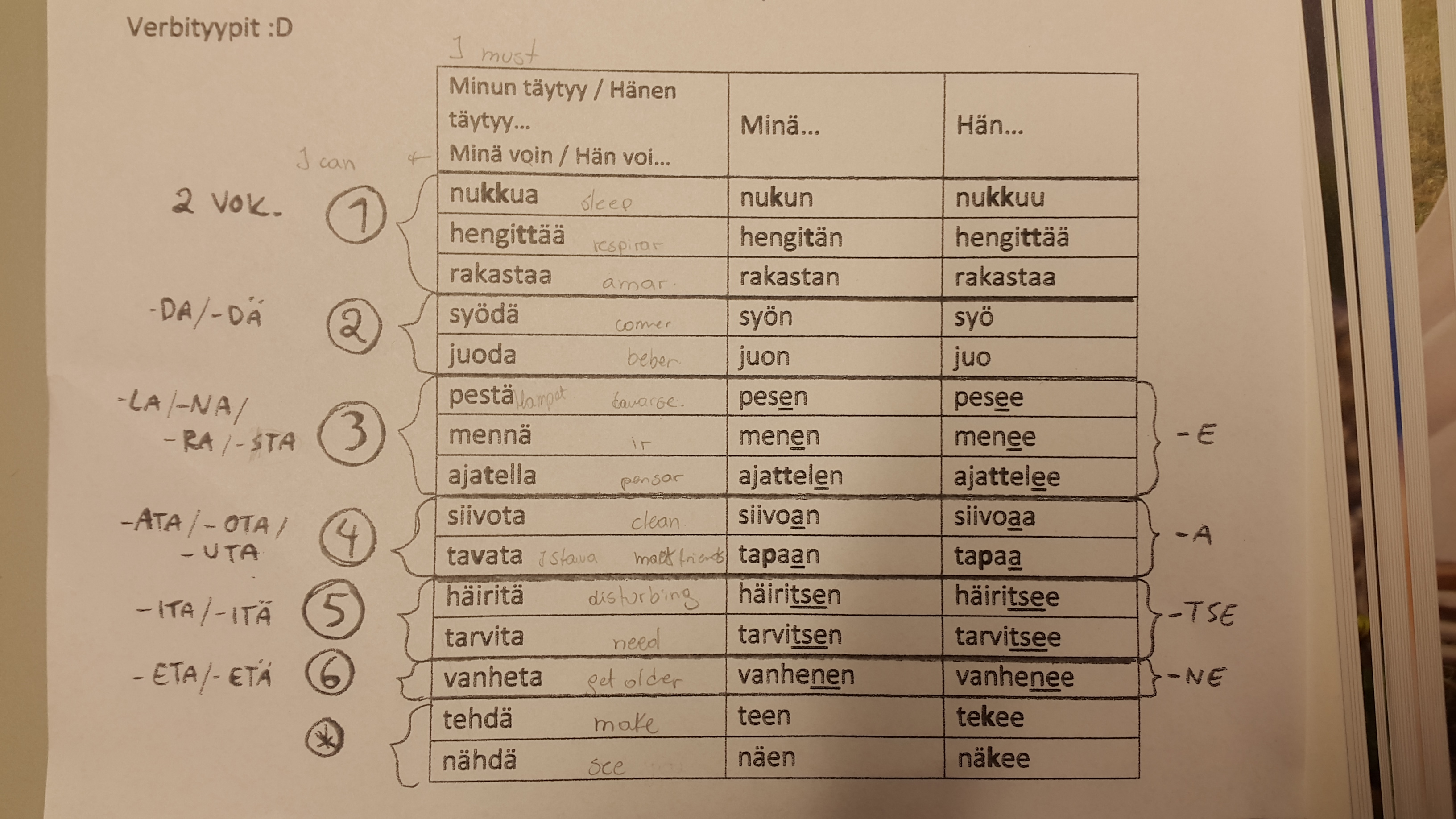